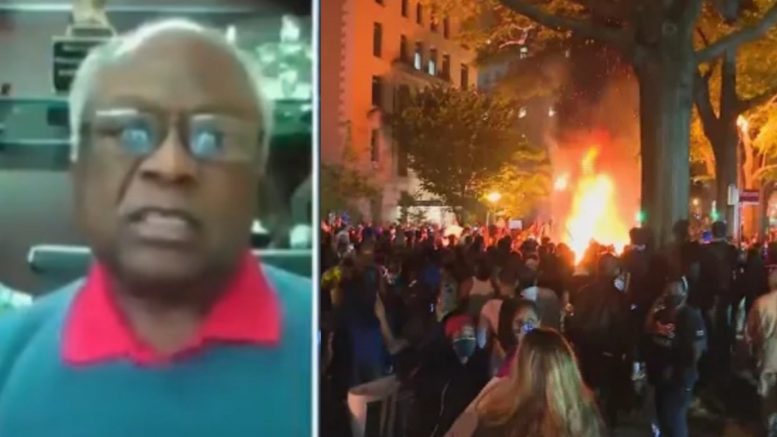 House Majority Whip James Clyburn (D – SC) claims the only violence that he witnessed during the protests that rocked Washington, DC came from police “horseback riders”.

Clyburn made the assessment while speaking with Fox News host Neil Cavuto on Tuesday.

Related Article: Trump Reacts To White House Protests: “These Are ‘Organized Groups’ That Have Nothing To Do With George Floyd”

“Violence is not our game,” Clyburn told Cavuto. “That’s the President’s game.”

“The only time I saw violence in Washington, DC, was those horseback riders driving people off the streets,” he declared. “That’s when I saw it.”

“It’s [President Trump’s] game,” Clyburn added. “That’s not our game and we’ll not play his game.” Video Below

Rep. Clyburn conveniently failed to mention the chaos that erupted from DC demonstrators, including mass looting, vandalism and arson that took place during the protests, which happened in close proximity to the White House. Video Below

Several area businesses were looted, windows were shattered, private property was destroyed and objects and buildings, including St. John’s church, were set on fire.

We leave you with a couple videos that detail some of the mayhem and destruction that took place during the DC protests:

Hannity: It’s Become ‘So Bad Under Biden That Even Psaki Is Now Suggesting Kickboxing & Margaritas to Help Ease the Pain’