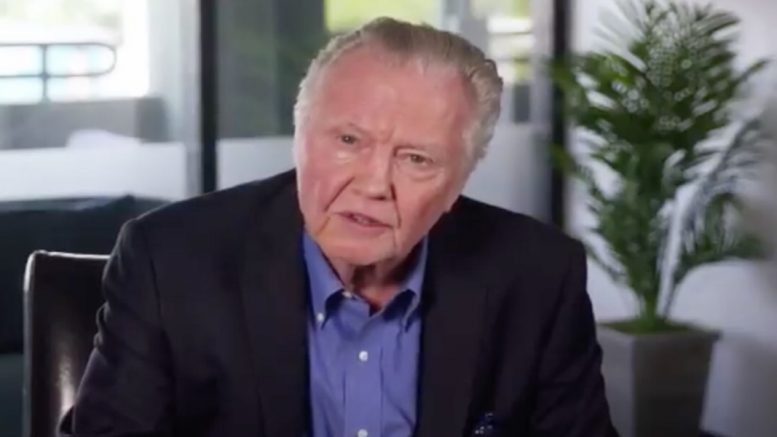 Conservative actor Jon Voight took to Twitter Monday with a message in the wake of protests and riots across the nation after the death of George Floyd.

“This nation has been altered with darkness upon her land with left wing propaganda and a reminder of history’s past lessons. This constant battle of protesting against each color is not what God has planned. He who has guilt, rage, disappointment, must realize that all are emotions that all have,” Voight said. “This is why we have rules to follow that protect this land, dreams, and hope.”

“We stand, all of us, as a nation under God. We have come through many years against verbal attacks against black, white, Jew, Christian, and all religions. This is why wars erupt. There’s always battles for control,” Jon Voight continued.

He wondered: “How can we see such havoc in this time of our lives to destroy our police protection? These are men on duty, serving, protecting, and all who want to behave to run around stealing like criminals with no law and order. This is a disgrace to mankind. This is a disgrace to the higher power of God, our only Savior.”

Voight went on to say: “Donald J. Trump has no sword for this battle he has been in. He has love and his want to achieve his highest dignity that this country deserves– and to the people of America, he has sworn to deliver this, and he has morning, day, and night– sacrificed his life to turn this battle into a union of glory.” Continued Below

“No other president besides [Abraham] Lincoln faced down such radical behavior,” he explained. “Their job was to protect the United States of America.”

“So let us remember the truths for which we stand– for peace and love– one nation under God and liberty, and justice for all, and all else are excuses to destroy America, destroy good for evil, for lack of truths,” Voight said.

“Let’s put away our bricks and bars,” he recommended. “Remember how far we’ve come since the Civil War, how our forefathers made a truce. Let us remember this truth and not fall back and only forward with peace, as Jefferson quoted, ‘Love thy neighbor as thy self’– a reminder than in November, we must all vote and keep President Trump in office, to keep our country safe.” Video Below

“No other will ever be Donald J. Trump– a gifted man of truths and strength to prepare his country for greatness again. God bless,” Voight concluded.

(Related: Jon Voight: “We Will Win 2020! …There Is Only One Man, This Is Our President Of The United States Of America, Donald Trump”)

Jon Voight Calls for Impeachment: ‘Don’t Let President Biden Tear Down Every Inch that Was Sacrificed with Blood, Sweat & Tears for His Dictation of Lies’