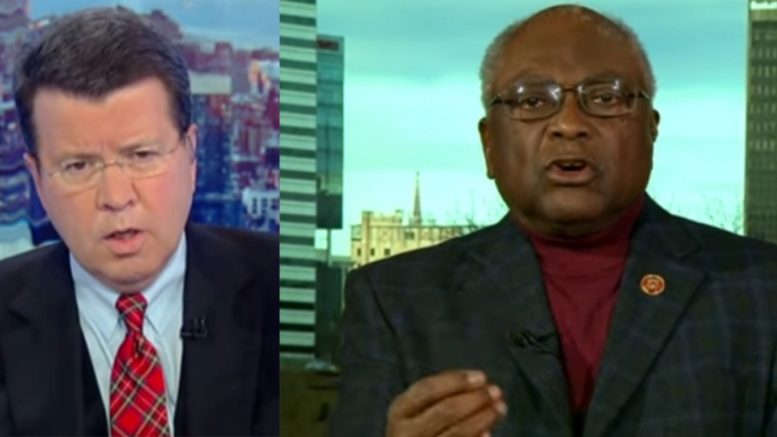 After House Democrats voted in favor of two articles of impeachment against President Trump, House Speaker Nancy Pelosi insinuated to the press that she would hold on to articles from the Senate until the pending rules to a trial seem to be “fair” to her liking.

When pressed on Pelosi’s strategy, Clyburn suggested thst Democrats are concerned that the process by the Senate could be rigged. However, Cavuto stopped him and mentioned that Republicans complained throughout the entire House process that it was rigged.

“I say it was not (rigged),” Clyburn said. “When you say to the President ‘Please come and testify, send all your people over here and let them testify and be under oath.’ That’s what we offered. That’s what he refused. So how do you say we are rigging it, when all we asked…is to come be a part of it?”

Cavuto responded by questioning what kind of leverage Nancy Pelosi gets by holding off on sending the articles to the Senate. And Clyburn answered by bringing up Bill Clinton’s impeachment and mentioning all 100 senators at that time voted in favor of the trial rules and he asked, “Why won’t Mitch McConnell do the same thing here?”

Cavuto brought up that he covered Clinton’s impeachment and pointed out that from what he remembers, the House “didn’t hold off on getting those articles to the Senate. Here, Nancy Pelosi has them…I can’t figure out for the life of me what she — what Democrats might get out of that.” Video Below

Clyburn claims Pelosi didn’t have to hold off on sending articles and said Democrats are waiting on Senate rules to be worked out so they know how many “managers” they need to send. “If we knew what the process was, we would know what to do,” he said.

Cavuto interrupted and said, “That’s not your process. That’s the Senate’s process, right? You’re not there to judge them nor are they to juddge you.” He then asked Clyburn if he thinks the handling of impeachment in the aftermath of the vote is looking bad for Democrats.

“Well, the political process is a little bit like beauty. It’s in the eye of the beholder,” Clyburn declared. “It looks very good to me and to my constituents.” Video Below