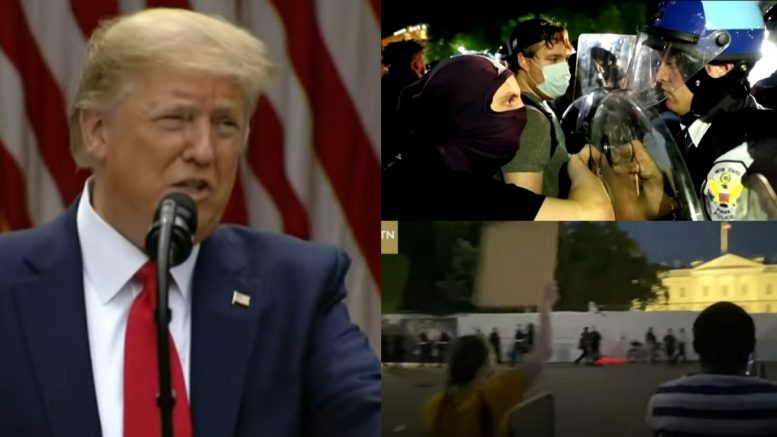 President Trump issued a statement in response to the protests that ignited outside the gates of the White House.

The White House was put under a brief lockdown on Friday night, as demonstrators protesting the killing of George Floyd gathered around the White House. The Secret Service ultimately took control of the situation and stood guard until the protest fizzled out.

In a message posted Saturday on Twitter, Trump stated the following:

“Great job last night at the White House by the U.S. @SecretService. They were not only totally professional, but very cool. I was inside, watched every move, and couldn’t have felt more safe. They let the “protesters” scream & rant as much as they wanted, but whenever someone got too frisky or out of line, they would quickly come down on them, hard – didn’t know what hit them. The front line was replaced with fresh agents, like magic.

“Big crowd, professionally organized, but nobody came close to breaching the fence. If they had they would have been greeted with the most vicious dogs, and most ominous weapons, I have ever seen. That’s when people would have been really badly hurt, at least. Many Secret Service agents just waiting for action….As you saw last night, they were very cool & very professional. Never let it get out of hand. Thank you!

“On the bad side, the D.C. Mayor, @MurielBowser, who is always looking for money & help, wouldn’t let the D.C. Police get involved. ‘Not their job.’ Nice!” Continued Below

Moments later Trump tweeted, “The professionally managed so-called ‘protesters’ at the White House had little to do with the memory of George Floyd. They were just there to cause trouble. The @SecretService handled them easily. Tonight, I understand, is MAGA NIGHT AT THE WHITE HOUSE???”

“These are ‘Organized Groups’ that have nothing to do with George Floyd. Sad!” he concluded.

Here is video of the situation that unfolded outside of the White House on Friday night: