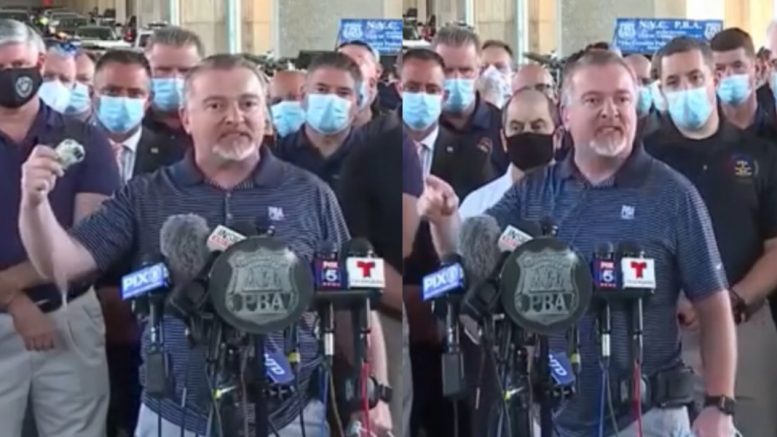 The New York Police Benevolent Association (PBA) vehemently pushed back Tuesday during a press conference against state legislators and the media for “vilifying” law enforcement officers amid nationwide protests over the death of George Floyd.

New York Police Benevolent Association President Mike O’ Meara told reporters that officers have 375 million interactions with individuals each year and that most of them are “overwhelmingly positive.”

“But what we read in the papers all week is that in the black community, mothers are worried about their children getting home from school without being killed by a cop. What world are we living in? That doesn’t happen,” Mike O’Meara told the press.

O’ Meara held up his police badge and declared: ” Well, you know what? This isn’t stained by someone in Minneapolis. It’s still got a shine on it. And so do theirs.”

“Stop treating us like animals and thugs and start treating us with some respect! That’s what we’re here today to say. We’ve been left out of the conversation. We’ve been vilified. It’s disgusting– trying to make us embarrassed by our profession,” O’ Meara expressed. Continued Below

“Nobody talks about all of the police officers that were killed in the last week in the United States of America, and there were number of them,” he pointed out.

O’Meara said he condemns the acts of Derek Chauvin, the former Minneapolis police officer who knelt on Floyd’s neck for more than eight minutes. “We roundly reject what he did as disgusting. It’s disgusting! It’s not what we do,” he said.

“Our legislators abandoned us. The press is vilifying us,” he informed reporters. “Well you know what guys? I’m proud to be a cop. And I’m gonna continue to be proud to be a cop until the day I retire.” Video Below

NYC PBA President Patrick Lynch told the press: “8 minutes is wrong … there was no struggle… we denounce it and we have from the beginning.”

Pat Lynch on death of #GeorgeFloyd, “8 minutes is wrong…there was no struggle…we denounce it and we have from the beginning.” pic.twitter.com/rXE3cbU2w1

Patrick Lynch went on to explain: “Our politicians want us to walk away from our communities and abandon you.”

Pat Lynch on the effect of the anti-police movement: Our politicians want us to walk away from our communities and abandon you. pic.twitter.com/aGSDtgh4CL

Pat Lynch: Never apologize for being a police officer pic.twitter.com/NADCLyRjg5

Groups representing 200,000+ law enforcement officers in NY State joined together to condemn actions of the NYS Legislature & Governor in using the current crisis to hastily push through legislation to diminish public safety & make the job of all LEO’s more difficult & dangerous. pic.twitter.com/vZyMoTZj71