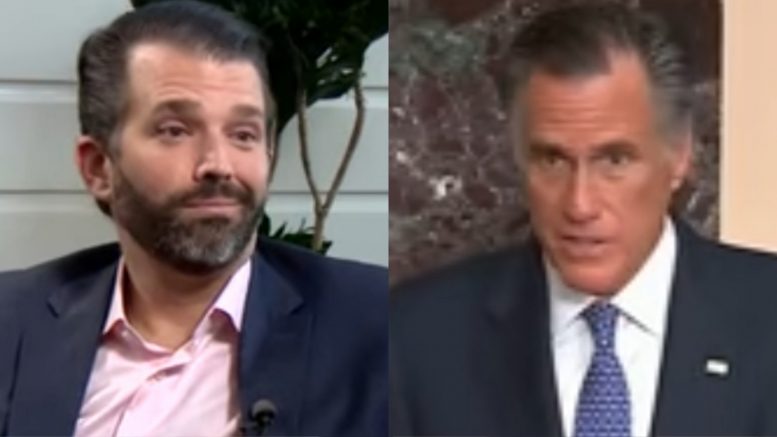 Donald Trump Jr. isn’t phased by a rumor that Senator Mitt Romney won’t be supporting his father’s bid for re-election, and he doesn’t think other GOP candidates should be concerned if Romney doesn’t support them either.

Trump Jr. made the assertion after The New York Times reported that Romney along with other well-known Republicans, including former President George W. Bush, will not be supporting President Trump’s bid for re-election.

As reported by The New York Times:

“Former President George W. Bush won’t support the re-election of Mr. Trump, and Jeb Bush isn’t sure how he’ll vote, say people familiar with their thinking. Senator Mitt Romney of Utah won’t back Mr. Trump and is deliberating whether to again write in his wife, Ann, or cast another ballot this November. And Cindy McCain, the widow of Senator John McCain, is almost certain to support Mr. Biden but is unsure how public to be about it because one of her sons is eying a run for office.”

The New York Times did not reference who their sources were, and since the story has been published, one of George W. Bush’s spokesmen said the claim made about the former 43rd president is “completely made up”.

Whether the claim about Romney is true or not, Trump Jr. said quite frankly that he does not “give a shit”, nor should anyone else in the Republican party.

Related Article: George Bush’s Spokesman Denies NYT’s Report That Bush Won’t Vote For Trump: “This Is Completely Made Up”

“Mitt RINOmney won’t be endorsing Trump, as if @realDonaldTrump or any other republican candidate would give a shit,” Trump Jr. tweeted.

“Worth noting that Mittens begged for Trump’s endorsement during his Senate run,” he added. “One of these guy’s endorsements actually matters… the other not so much!” See Below