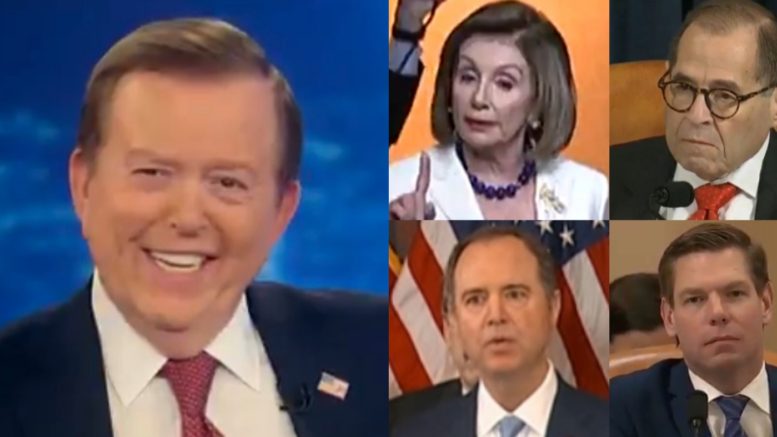 Lou Dobbs gave some insight on how he thinks impeachment will play out for Democrats as the process has reached its final phases in the House.

Dobbs made the remarks while interviewing conservative columnist Byron York, where the two analyzed data that suggests impeachment is not panning out the way Democrats had hoped.

Byron York got done mentioning how polling data shows that support for impeachment has gone down among Repubicans and Independents, while Democrats are “set in concrete” in their support. Dobbs interupted and said “And, they are sinking rapidly.”

He then declared, “It is going to be a stain on the Judiciary Committee and perpetuity and the speakership of Nancy Pelosi.” Video Below

“It could not be otherwise because this is the culmination of what has been more than a three-year effort on the part of the radical Dems and the deep state to block, to obviscate, to overthrow President Trump without a single fact in support of the ridiculous plot that the intelligence agencies spun up amongst four, perhaps five of those agencies,” Dobbs proclaimed.

“It is just so horribly corrupt to look at,” he added.

“It is mind-numbing to think it’s taken this long for this to be revealed to the American people,” Dobbs concluded. Video Below

In seperate commentary, Dobbs discussed that Democrats “misjudged” just how united Republicans would become over the impeachment process.

Here is video of that segment:

Pelosi Says We Must Be ‘Prayerful’ During Impeachment Effort, Pastor Jeffress Fires Back: It’s Hard To Take Her Call To Prayer Seriously