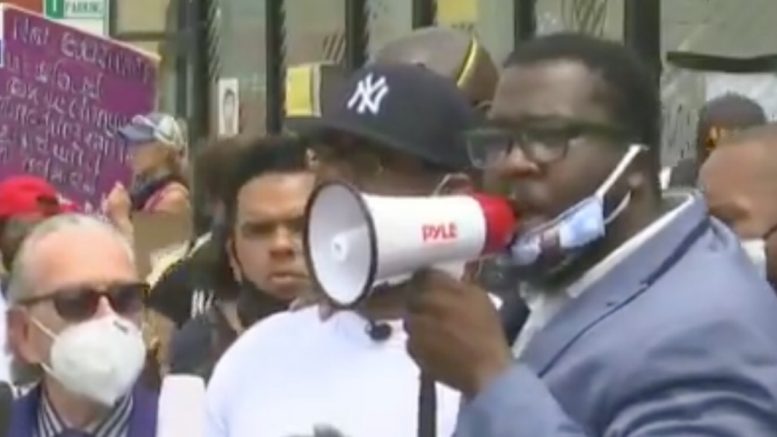 George Floyd’s younger brother spoke out Monday against the looting in cities across the nation Monday in the wake of his brother’s death, George Floyd. His brother traveled from his home in Brooklyn to Minneapolis to visit the very spot where his brother died in police custody.

He arrived at the Minneapolis intersection where his brother’s life came to an end. Terrence Floyd arrived at the intersection around 1 p.m., marking the first time a member of the Floyd family has visited the spot where George Floyd died after a police officer kept a knee on his neck for eight minutes, NBC News reported.

“It may feel good for the moment, just like when you drink. But when it come down, you gonna wonder what you did,” he explained.

Terrence Floyd explained that his family is a “peaceful family” and “God fearing”, noting that he’s upset.

“In every case of police brutality, the same thing has been happening. Ya’ll protest. Ya’ll destroy stuff and they don’t move. You know why they don’t move? Because it’s not their stuff, it’s our stuff. So they want us to destroy our stuff. … So let’s do this another way,” he said. “Let’s stop thinking that our voice don’t matter and vote… educate yourself, … because it’s a lot of us, and we still going to do this peacefully.” Continued Below

Rev. Kevin McCall, a civil rights leader, made the journey with Floyd’s brother to Minnesota. He grabbed the megaphone and also urged protestors to “stop looting and throw up the peace sign”

“We flew all the way here for simply one message: we came in solidarity of those who are in–  been in the streets peacefully protesting, simply saying no justice and no peace,” McCall said. “This family is a respectable family. This family is a peaceful family.”

McCall added: “We are sending a message to people all over this country to stop looting and throw up the peace sign.”

Brother of George Floyd: “Stop Looting and throw up the peace sign” pic.twitter.com/c3d3c5kQ0m

(Related: Texas Homeless Veteran Tears Into Rioters After They Burn His Bed: “What The F— Are You Doing?!”)

WATCH: President Trump Breaks It Down With Dance Moves At The End Of His Minnesota Rally