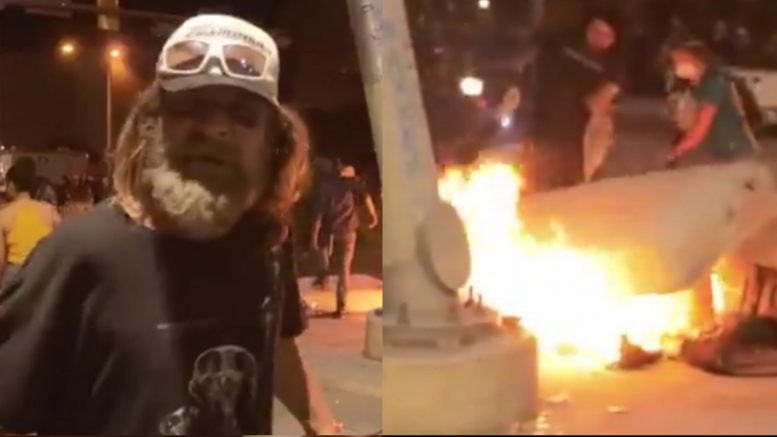 A homeless man in Austin, Texas tore into rioters after they set his mattress on fire during demonstrations over the weekend.

A video taken by Blaze TV shows rioters throwing a mattress on top of a pre-lit fire, while a homeless man, who has since been identified as a combat veteran with PTSD, runs over and immediately pulls it off the flames and proceeds to yell at them.

According to Law Enforcement Today, an Austin police officer said the homeless man is known in the area and believed to be a combat veteran who has battled PTSD for years. Video Below

Austin’s police department is reportedly “reviewing the footage and trying to identify the suspects,” as per Law Enforcement Today. Continued Below

This latest disgraceful act by rioters came as President Trump announced that the far-left group Antifa would be designated as a terrorist organization. Antifa is said to have hijacked nationwide protests related to the death of Minneapolis, MN citizen George Floyd.

Other gruesome videos have surfaced showing rioters attacking innocent bystanders, including a couple who were defending their business from demonstrators and reporters who were covering the protests.

We leave you with those videos:

A woman tries to protect her livelihood, and is almost beaten to death by these savages. Is this a hate crime? https://t.co/TDdHyn5IfG

While broadcasting live on social media tonight, several members of our team were attacked while covering Birmingham protests as they turned violent.

(All members of our team are safe.)

WATCH: Rep. Boebert Visits The Border With A Cardboard Cutout Of Kamala Harris: “Look At What You’ve Done”

Dan Bongino RIPS Antifa Following Portland Protests: ‘How Is This Not A Domestic Terror Group’