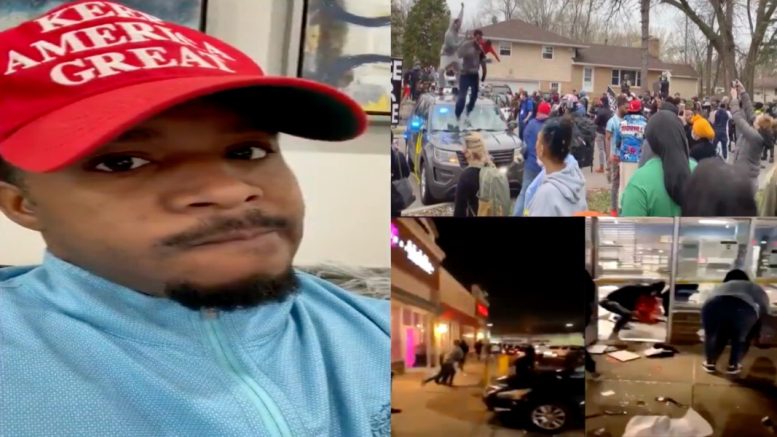 Looting and rioting erupted in Minnesota’s Brooklyn Center area after an officer shot a man identified as Daunte Wright–20 years-old– during a traffic stop in Brooklyn Center, Minnesota, who then crashed his vehicle and died.

Several businesses in the area have been “completely destroyed,” while rioters clashed with police, according to videos shared on social media.

Internet sensation Terrence Williams lashed out at the Minneapolis rioters and looters on Monday while sharing some of the video footage of what took place Sunday evening, declaring, “[You’re] not protesting, [you’re] stealing!”

“Can somebody please explain something to me? I don’t get it, I just don’t get it. … What does stealing shoes have to do with somebody being shot by the police? That’s what I don’t understand,” Williams said.

“These people claim they are protesting because an officer shot a Black man. Why are you at the store stealing shoes? The police is not there, so you not protesting, you stealing!” he declared. “That’s what [you’re] doing. You are taking advantage of situation. That’s what you are doing.”

“These people that are stealing shoes and stealing clothes don’t give a damn about nobody but themselves. All they care about is filling up their closets with new shoes and new clothes. So you mean to tell me that that ya’ll were so hurt and so sad that a cop shot somebody, so you went to the store to steal shoes? That don’t [sic] make no sense,” Williams said. Continued Below

“Those stores didn’t do nothing [sic] wrong to you, or to nobody. So why are you all up in there taking their stuff? Exactly. A bunch of no good thieves. That’s what ya’ll are. That don’t make no sense at all. Not even gonna wait on the facts, just want to head straight to the Nike store. Sad. Pathetic. Embarrassing,” Williams expressed. Video Below