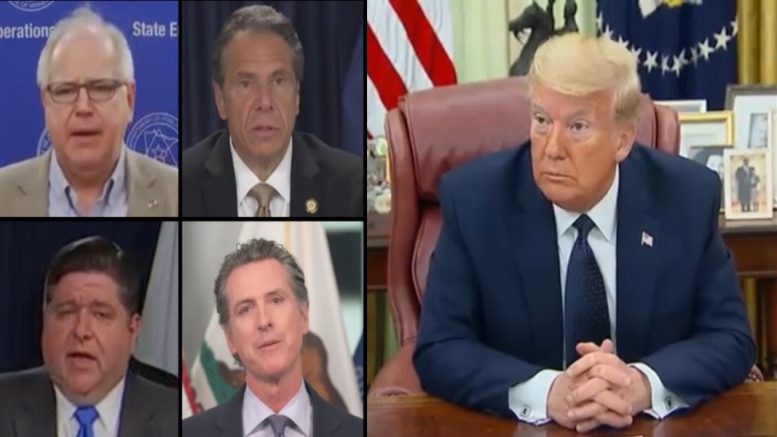 President Trump, on Monday, scolded U.S. governors over their protest handling amid the violent riots, which have broke out across the country following the death of George Floyd, calling them “weak” and recommending that they “have to arrest people”.

“Most of you are weak,” the president said. “You have to arrest people,” Fox News reported.

Trump, on the call with governors, law enforcement and national security officials, also told local leaders they “have to get much tougher” on protesters.

Attorney General William Barr said he wanted protesters charged with federal crimes. Barr has in recent days emphasized that it is a crime to cross state lines to engage in violence, and the administration as a whole has fixated on Antifa, a loose movement of anti-fascists, The Hill reported.

“Federal law enforcement actions will be directed at apprehending and charging the violent radical agitators who have hijacked peaceful protest and are engaged in violations of federal law,” Barr said in a statement Sunday.

The president has called for “law and order” and urged governors to activate the National Guard and crackdown more strongly on protesters. Currently, about half of the 50 states and Washington, D.C., have activated the National Guard to handle the protests, as per The Hill

CNN’s Oliver Darcy tweeted part of the audio of the the president’s phone call, in which he claimed Trump “lashes out”. It is not clear where CNN obtained the audio or by whom.

Here's the audio of that remarkable call where Trump lashes out at governors and says they need to crack down on protesters. pic.twitter.com/ANSsniYItN

(Related: Trump Reacts To Biden’s Staffers Donating To Group Bailing Out Protestors: “[He] Doesn’t Know Anything About It, He Is Clueless”)