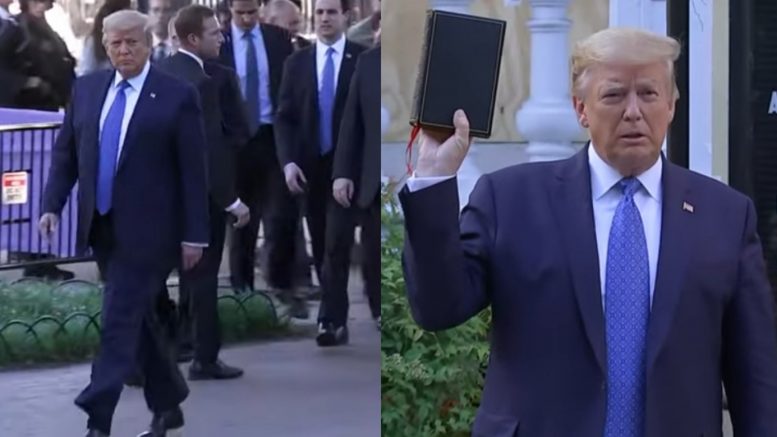 On Monday, President Trump made the stunning decision to walk through the White House gates and to the epicenter where DC protests had been taking place.

The President apparently was on a mission to visit the historic St. John’s Church, which was set ablaze on Sunday evening.

Related Article: Trump Scolds U.S. Governors Over Their Protest Handling: “Most Of You Are Weak. You Have To Arrest People.”

The move by Trump came just moments after he delivered a Rose Garden speech, where he announced “immediate action” to utilize “all available federal resources” to stop riots, looting and destruction across America.

Following the President’s speech, Fox News correspondent Kristin Fisher tweeted a video of Trump walking out of the White House and towards the White House gates with his entourage.

Fisher captioned the video, “I almost can’t believe what I’m seeing. POTUS just walked out the front door of the White House and into Lafayette Square – the epicenter of the DC protests – to visit historic St. John’s Church, which was set on fire last night.” Video Below

I almost can’t believe what I’m seeing. POTUS just walked out the front door of the White House and into Lafayette Square – the epicenter of the DC protests – to visit historic St. John’s Church, which was set on fire last night. pic.twitter.com/XueoF2RC6z

Moments later, C-SPAN uploaded a video, which can be seen below, of President Trump’s entire walk to the church.

He is then spotted in front of St. John’s, where he held up a Bible. Video Below

As per Fox News, Rev. Rob Fisher of St. John’s shared a miracle in regards to the damage sustained by the church on Facebook.

Fisher is quoted as saying, “I am happy to share with you that I could see no other real damage besides that one room, and quite a bit of graffiti and debris around the exterior of the church. Protestors easily could have done a lot worse to our buildings, but they chose not to do that. (The damage I saw to other nearby buildings illustrated this point.)”

In ending, here is video of President Trump’s full Rose Garden speech that he delivered before visiting the church:

Dan Bongino RIPS Antifa Following Portland Protests: ‘How Is This Not A Domestic Terror Group’