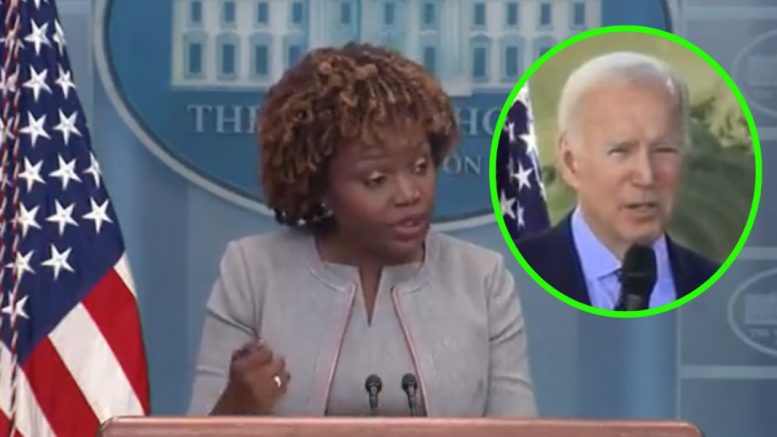 White House press secretary Karine Jean-Pierre doubled down Monday, claiming 79-year-old Joe Biden comments over coal plants were “twisted” when he said on Friday that his administration is going to be “shutting” coal plants “all across America” and replacing the energy with “wind and solar”.

“So it’s gonna become a wind generation. … We’re gonna be shutting these plants down all across America and having wind and solar,” Biden said very clearly.

"We're gonna be shutting these plants down all across America, and having wind and solar." pic.twitter.com/JXIZxDzvsu

After Biden made the comment over shutting down coal plants, White House press secretary Karine Jean-Pierre issued a statement on Saturday, alleging the career politician’s remarks “have been twisted”.

She said in part, “The President’s remarks yesterday have been twisted to suggest a meaning that was not intended; he regrets it if anyone hearing these remarks took offense.”

Jean-Pierre on Monday, doubled down, claiming Biden’s words “were twisted” and also alleged “it was loud and hard to hear” him.

“We put out a statement. It seems like there was some confusion,” she said on Monday at the White House briefing.

“Some of you were there. It was loud and hard to hear, I think, or maybe not — exactly what … what was being said. I currently don’t want to get into punditry from here and why we did it. … We believe the president’s words were twisted,” the White House press secretary claimed.

A reporter asks why the White House felt the need to walk back Biden's comments on shutting down coal plants:

"It was loud and hard to hear…The president's words we believe were twisted…[Biden] has spent his presidency fighting for coal communities…" pic.twitter.com/H9uoPlSy2t

You’re a liar. We heard what he said

Rep. Greene Files Articles of Impeachment Against Biden for ‘Selling the American People’s Oil to our Enemies’

Rep. Buck Issues A Message To Biden & Beto, Daring Them To Take Away His AR-15 Out Of His Office