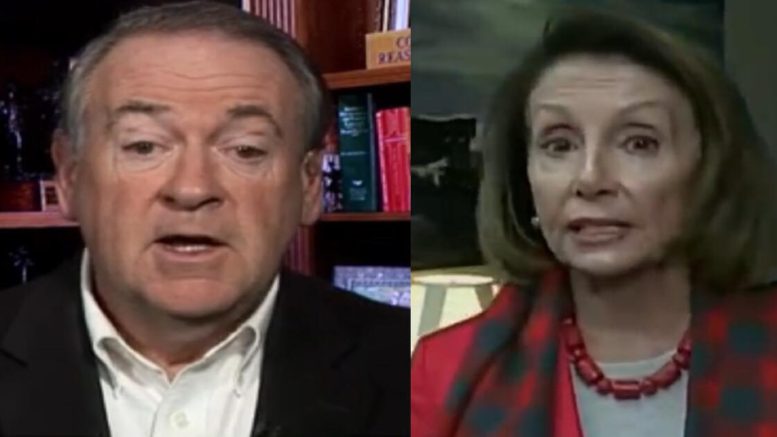 On Saturday, President Trump addressed the nation and outlined his plan to address border security concerns and put an end to the partial government shutdown. The plan includes the temporary extension of legal protections for DACA recipients and funding for the wall. (Video Below)

Mike Huckabee on Monday, said that President Trump made an incredibly generous offer to Democrats, and that it’s a compromise, further he added that the President laid out on the table what Democrats said they wanted.

Speaker Nancy Pelosi (D-CA) rejected the President’s offer before it was even presented. Oddly, she accepted Obama Care and told the American people that it has to be passed to find out what is in it.

“I think it’s time for Nancy Pelosi to quit playing politics with the lives of these people; accept the fact that there is more than one branch of government.” Huckabee explained.

He pointed out, “She doesn’t run the whole thing, unlike what she thinks. She is not equal to the President. She is the Speaker of one half of Congress– and sit down and work this out, and get it done today and be done with it.”

Huckabee also took to Twitter after Pelosi rejected Trump’s offer and he wrote, “Nancy Pelosi calling @realDonaldTrump compromise offer a non-starter before she even knew what was in it is like a 3 year old refusing to eat vegetables before even tasting. She could care less about govt workers or “Dreamers” and that’s a fact the “fact checkers” can check!” (Video Below)

Grenell On Swalwell’s Ties To Alleged Spy: “This Is The Tip Of The Iceberg…There’s Many, Many More”