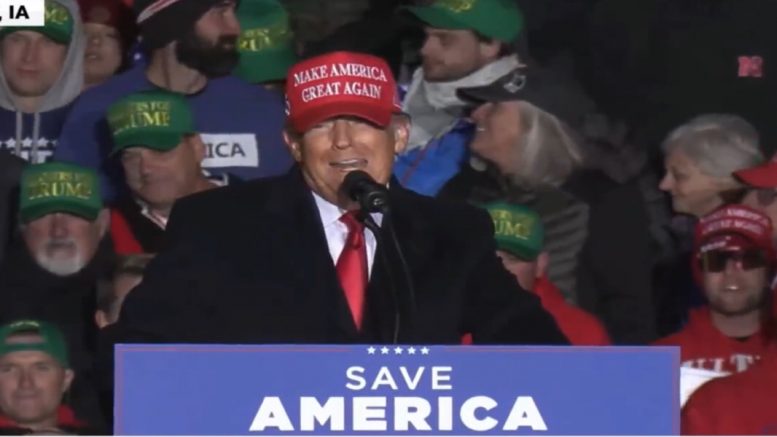 During a rally in Sioux City, Iowa on Thursday evening, Donald Trump offered his most revealing indication to date that he will run for a third time for commander-in-chief, proclaiming, “Get ready!”

The 45th President hinted about his intent to run after suggesting the country needs a leader who will fix the Democrat’s disastrous policies which are failing America.

“Get ready! That’s all I’m telling you, very soon,” he declared. “Get ready!”

Trump has increasingly hinted that he is leaning toward running in 2024, which has continued to build anticipation as to when he will officially announce his decision.

According to pollster John McLaughlin of McLaughlin & Associates, Trump is on track for reelection in 2024 as long as he stays on his current course.

“There’s only one person that can beat Donald Trump, and that’s Donald Trump,” McLaughlin said during the “John Solomon Reports” podcast last week. “But if Donald Trump keeps playing it smartly and correctly, as he’s done over the past two years, like Ronald Reagan, he will come back, and he will be elected.”

Citing his company’s most recent national survey, McLaughlin noted that 65 % of voters feel the country is headed in the wrong direction, and 67 % of the group attribute that position to the policies and leadership of 79-year-old Joe Biden.

John McLaughlin: '65% of voters think the country is on the wrong track,' majority blame Joe Biden as cause | Just the Newshttps://t.co/BlDOWQWa7d

Related: Kellyanne Conway on Trump Announcing his 2024 Presidential Bid: ‘I Think you can Expect him to Announce Soon’

‘A Political NO, NO!’: Trump on Biden White House Involved in DOJ’s Mar-a-Lago Probe Against Him