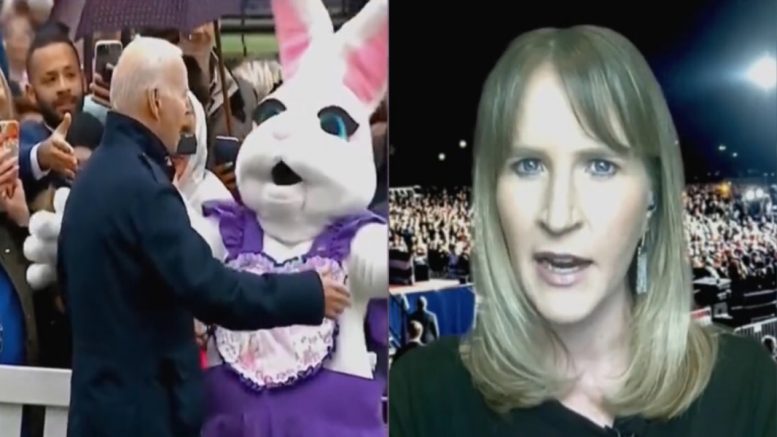 During the White House Easter Egg Roll on Monday, Biden appeared to be quickly interrupted by the Easter Bunny while he was answering questions about Afghanistan and Pakistan. Further, Jill Biden was heard instructing her husband to wave after a speech he gave.

You're probably having a better day than Joe Biden being treated like a child at the White House Easter celebration. pic.twitter.com/eM8NB8E9mb

Liz Harrington commented over the matter, saying, “It’s really unbelievable. Biden actually resembles one of these nursing home residents that they wrote in ‘Biden votes’, than a president himself.”

“It is sad and it would be sad, but this is country. This is our Constitutional Republic. And what these moments show is we no longer have the executive branch as the founders intended. This is not consent of the govern,” she said.

“This man is not running things. So who is? And that’s a really big problem. Every time they trot him out here — now he can’t even do these very mundane events with kids — the Easter Egg Roll and events like that. I mean, he’s incapable of doing anything. It just brings the real question: Who is running the country, the most powerful nation on earth?” Harrington asked. Video Below

“Every time they do trot him out, our friends and our foes are watching. What are they learning from these events? That America is not what we were under President Trump. We are not a strong nation right now, because we’re really leaderless. And it’s very sad for our country,” Trump’s spokeswoman expressed.

Biden looks more like a nursing home resident who they used to write in Biden votes than he does a president pic.twitter.com/uHFYYswkWO