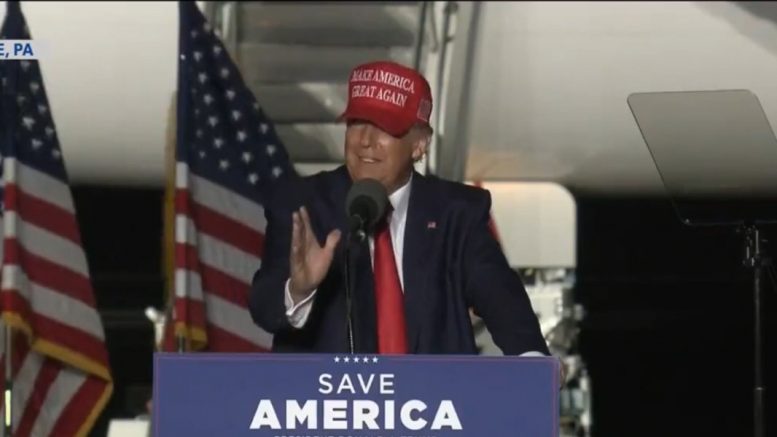 During a “Save America” rally in Latrobe, Pennsylvania Saturday evening, President Donald Trump gave yet another indication he will likely be announcing a 2024 presidential campaign in a “very short period of time”.

“I ran twice; I won twice, and did much better the second time than I did the first, getting millions and millions of more votes than we got in 2016 – and likewise getting more votes than any sitting president in the history of our country by far,” President Trump told the audience.

“And now in order to make our country more successful and safe and glorious, I’m just going to tell you, I really believe — I’m not going to say it right now,” he continued.

“So, everybody, I promise you in the very next very, very, very short period of time, you’re going to be so happy, OK? And one of the reasons I don’t want to do that right now, [be]cause I’d like to do it, but you know what?” Trump said. “I really mean this: I want to have the focus tonight on Dr. Oz and on Doug Mastriano.”

TRUMP on running in 2024: "I'm not going to say it right now… so, everybody, I promise you, in a very, very, very, very short period of time, you're going to be so happy.' #SaveAmerica

TRUMP: "In 2024, most importantly, we are going to take back our magnificent White House… & you're going to be hearing about it very soon, very, very, very soon." #SaveAmerica

Related: ‘Get Ready’: Trump Announces He Will ‘Very, Very, Very Probably Do It Again’