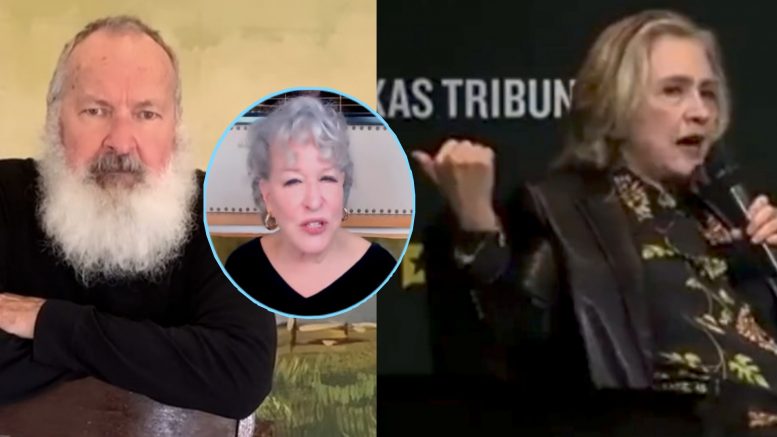 Quaid’s tweet came just hours after Hillary made the following remarks at the Texas Tribune Festival in Austin on Friday:

“I remember as a young student, you know, trying to figure out, how people get basically drawn in by Hitler. How did that happen? I’d watch newsreels and I’d see this guy standing up there ranting and raving, and people shouting and raising their arms. I thought, ‘What’s happened to these people?’”

“You saw the rally in Ohio the other night, Trump is there ranting and raving for more than an hour, and you have these rows of young men with their arms raised. I thought, ‘What is going on?’”

Bette Midler — the actress that Mr. Quaid compared Hillary Clinton to — has been known for making similar incendiary remarks in the past where she has often likened former President Trump to fascist dictators such as Nazi Leader Adolf Hitler.

It is difficult for me to take @HillaryClinton seriously any more. This is repugnant. https://t.co/JB8UVhZoix

As if she couldn’t be more unhinged at this point.

Has she taken a look at her own party?https://t.co/gchy0AvEEZ

She was mentored by Saul Alinsky. Accuse your opponent of doing what you are actually doing. Don't debate policy or issues. Go straight for slandering them personally. Hillary is as evil and corrupt as they come.

Learning from her Deplorables moment that helped cost her the 2016 election, future 2024 hopeful Hillary Clinton decides to up the ante. Because she’s a profoundly horrible candidate. https://t.co/WGmuMPZz97

Every time Hillary Clinton appears in public after Labor Day another batch of Republican voters remembers that the midterms are important. https://t.co/yLCpdKof6A