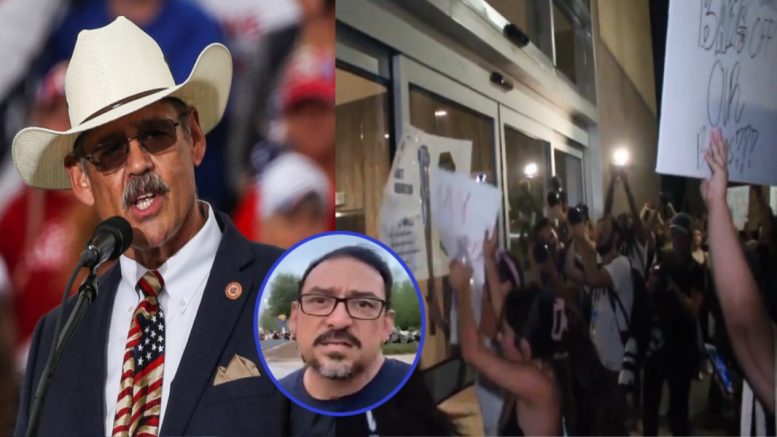 Arizona Republican secretary of state candidate Mark Finchem is calling on the Attorney General’s Office to investigate former Maricopa County Recorder Adrian Fontes and others who were involved in the June 24th Arizona “riot and insurrection” following the Supreme Court’s overturning of Roe v. Wade.

Outside the Capitol in Phoenix on Friday night, police fired tear gas to disperse anti-abortion protesters, forcing lawmakers to huddle briefly in a basement inside the building as they rushed to complete their 2022 session.

SWAT team members with the Department of Public Safety fired tear gas from second floor of the old Capitol building to disperse protesters in the mall between the current House and Senate buildings. KPHO-TV reported the officers opened fire when several anti-abortion protesters started banging on glass doors of the Senate building.

Following the incident at the Phoenix Capitol, Arizona Republican secretary of state candidate Mark Finchem issued a statement, “calling on the Attorney General’s office to identify the individuals behind the assault on the Senate on June 24th, and to prosecute them to the fullest extent of the law.”

Adrian “Fast and Furious” Fontes — the same person who was responsible for the 2020 Maricopa County election debacle — can’t get his facts straight. The Supreme Court of the United States held that Roe v. Wade was a mistaken opinion in the first place, as it did not take into account the rights of the state to make decisions about the people, but instead set a federal judicial standard for abortion.

Fontes, by aligning himself with the “night of rage“, actually participated in an insurrection against the state of Arizona Legislature. That is disgraceful behavior.

We will see more of the same from Adrian Fontes, just as we have seen from Katie Hobbs: lawlessness and a failure to enforce the elections procedure manual, which carries the weight of law.

The insurrection resulted in the defacing of veterans’ monuments, the near-breach of the Arizona Senate Building, and attempts to intimidate elected officials while they were holding session to do the peoples’ work.

I am therefore calling on the Attorney General’s office to identify the individuals behind the assault on the Senate on June 24th, and to prosecute them to the fullest extent of the law.

Video footage of protestors outside of the Phoenix Capitol on Friday:

Violent Pro-Abortion Activists attacked our Arizona Capitol. Not a single one of them was Arrested. Why? pic.twitter.com/IlQ3mLioz5

Video of when the session inside the Arizona state capitol was disrupted because of the pro-abortion rioters outside trying to break in. pic.twitter.com/qwZYLgO6YA

Adrian Fontes posted a video on Twitter Friday at the Phoenix Capitol, calling on protestors “to march”.

We need to march. We need to vote. Our democracy depends on it. pic.twitter.com/RvhB9nrU1Q

BREAKING: Mark Finchem Calls on the Attorney General’s Office to Investigate Adrian Fontes and Others Involved in the June 24th Arizona Riot & Insurrectionhttps://t.co/0Ooj6cuexX

We are currently there being held hostage inside the Senate building due to members of the public trying to breach our security. We smell teargas and the children of one of the members are in the office sobbing with fear. I expect a J24 committee to be created immediately.

AG Brnovich on DOJ Suing AZ Over ‘Proof of Citizenship’ for Presidential Elections: I will ‘Preserve Arizona’s Election Integrity Measures’