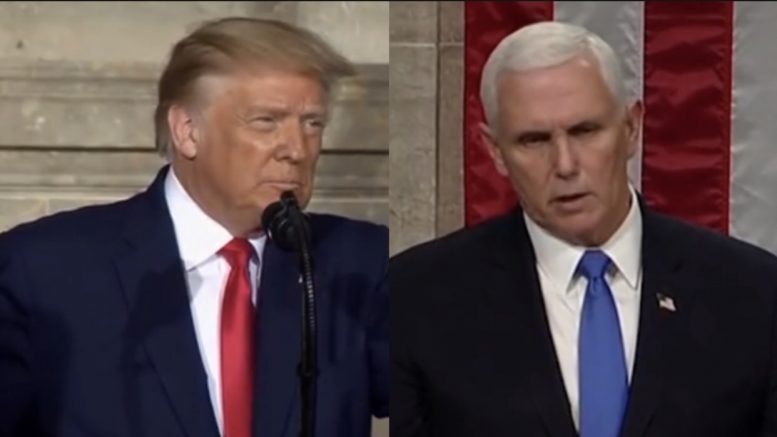 45th President Trump reacted Wednesday after the U.S. House of Representatives passed a bill to overhaul Congress’ certification process for presidential elections. The bill passed the House in a vote of 229-203.

In response to the passing of the bill, President Trump pointed out that then-Vice President Mike Pence “COULD HAVE” sent the “election results back to the State legislatures” and urged Republican senators to “VOTE NO” on the bill.

“The House just passed a Bill which prohibits the Vice President from doing what all the ‘great’ Democrat & RINO legal scholars said he couldn’t do, ‘under any circumstances,’ regarding sending election results back to State Legislatures,” Trump wrote.

“If the V.P. couldn’t do it, then why are they passing legislation saying he can’t do it [?] BECAUSE HE COULD HAVE DONE IT, and should have, based on large scale fraudulent election results,” the 45th President said of Pence.

“Would have been a different result. REPUBLICAN SENATORS SHOULD VOTE NO!” he urged.

The current process is laid out in the 1887 Electoral Count Act.

Trump, in a statement on January 30th, also wondered, “If the Vice President (Mike Pence) had ‘absolutely no right’ to change the Presidential Election results in the Senate, despite fraud and many other irregularities, how come the Democrats and RINO Republicans, like Wacky Susan Collins, are desperately trying to pass legislation to not allow the Vice President to change the results of the election?”