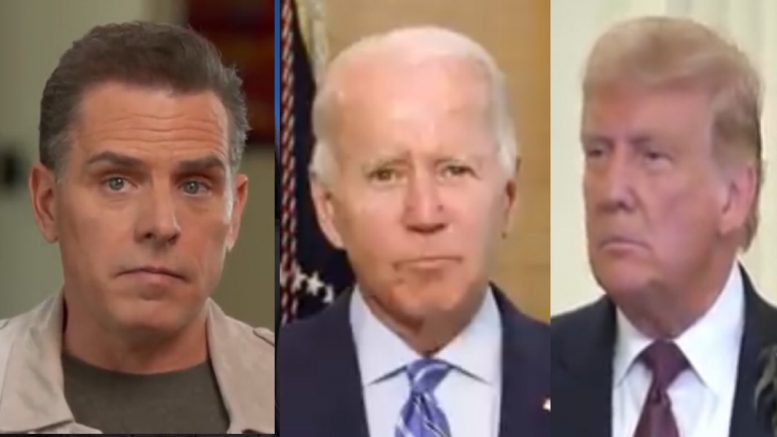 In a pair of Labor Day posts on his Truth Social app, 45th President Donald J. Trump unleashed against the FBI for its raid on his Mar-a-Lago home in Palm Beach, Florida and pointed out that feds “never raided or broke into” Joe Biden or his son Hunter’s house.

Trump asserted “high crimes and treason” were found on a laptop belonging to Hunter Biden, and it was recently revealed Facebook algorithmically suppressed the laptop story for 7 days in 2020 following FBI officials reportedly directing Meta CEO Mark Zuckerberg to do so.

“So they riffled through the living quarters of my 16 year old son, Barron, and the loved and respected former First Lady of the United States, Melania, but, despite proven high crimes and treason, and just plain common theft, all pointed out in the Laptop from Hell (and elsewhere), they never Raided or Broke Into the house of Hunter Biden or, perhaps even more importantly, the house of Joe Biden – A treasure trove!” President Trump wrote on Truth Social Monday.

“This is a Country that’s unfair and broken. We are truly a Nation in Decline!!!” he added.

In a second post on Truth Social, the 45th President wrote, “The USA is rapidly becoming a Third World Nation. Crooked Elections, No Borders, a Weaponized Justice Department & FBI, record setting INFLATION, highest ever Energy Prices (and everything else), and all, including our Military, is WOKE, WOKE, WOKE.”

“Most dangerous time in the history of our Country!!!” he proclaimed.

Related: ‘We Will Hold all of Them Accountable’: McCarthy Vows After Zuckerberg’s Admission of Suppressing Hunter Laptop Story