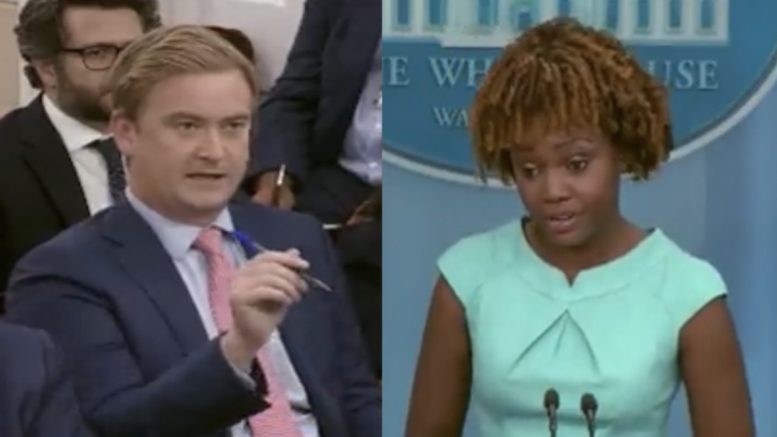 “A follow up about the MAGA-Republican attention: so if we’re all in agreement that it’s incorrect to say the 2020 election was stolen, what about the 2016 election?” Peter Doocy asked the White House press secretary.

The White House press secretary claimed that Doocy’s “comparison” was “ridiculous” then pivoted to what appeared as January 6 talking points.

Jean-Pierre claimed she was talking about “voting rights at the time”, then admitted Governor Brian Kemp and Donald Trump won their elections, before shifting to January 6.

“What we are talking about right now — let’s not forget what happened on January 6, 2021. We saw an insurrection, a mob that was incited by the person who occupied this campus, this facility at that time, and it was an attack on our democracy” she claimed, without mentioning 2020 summer riots.

Nobody been charged with “insurrection” from January 6 and the FBI found scant evidence that the January 6 attack on the U.S. Capitol was the result of an organized plot to overturn the presidential election result, according to four current and former law enforcement officials.

Ashli Babbit was killed by a Capitol Police officer on January 6 and the Department of Justice closed the investigation into her death just three months after the incident occurred.

Watch the full exchange between Peter Doocy and Karine Jean-Pierre:

‘We Interrupt This Celebration for a Hard, Cold Dose of Reality’: Cavuto Breaks Away From Biden’s Inflation Speech Amid ‘Stocks Tanking’

Liz Cheney Appears to Hint at Presidential Run, Trump Reacts: ‘She’s too Angry & Sick to Succeed in the Future, but who Knows!’