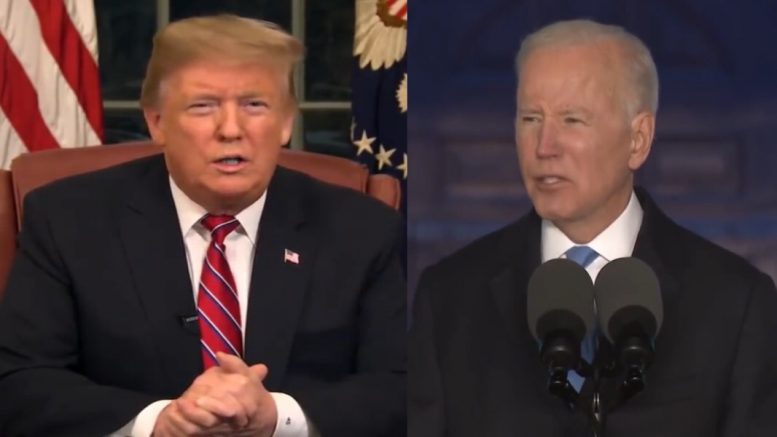 “It just never ends!” 45th President Donald J. Trump declared in an email statement on Thursday as 79-year-old Joe Biden has ordered the release of up to 1 million barrels of oil per day for the next six months from the strategic national reserves.

Biden will make the formal announcement Thursday outlining his administration’s plans to bring down the cost at the pump, WFTV 9 reported.

“So after 50 years of being virtually empty, I built up our oil reserves during my administration, and low energy prices, to 100% full,” the 45th President said in the statement from his “Save America” PAC.

“It’s called the Strategic National Reserves, and it hasn’t been full for many decades. In fact, it’s been mostly empty. It’s supposed to only be used for large-scale emergency or conflict,” he explained.

“Now I see where Biden has just announced he’s going to take what we so carefully and magically built, and what will be a futile attempt to reduce oil and gasoline prices,” Trump pointed out.

“They will soon bring it down to empty again. It just never ends!” he expressed. Continued Below

Trump’s statement comes as the national average price for a gallon of gas is $4.22, according to AAA Gas Prices.

“After consultation with allies and partners, the president will announce the largest release of oil reserves in history, putting 1 million additional barrels on the market per day on average—every day—for the next six months,” the White House said. “The scale of this release is unprecedented: The world has never had a release of oil reserves at this 1 million per day rate for this length of time. This record release will provide a historic amount of supply to serve as [a] bridge until the end of the year when domestic production ramps up.”

The release also calls for Congress to pass legislation incentivizing oil companies with American land to increase production on that land and prioritize the economic well-being of Americans over keeping their own profits high via higher oil and gas prices, Newsweek reported. Continued Below

“So after 50 years of being virtually empty, I built up our oil reserves during my administration, and low energy prices, to 100% full. It’s called the Strategic National Reserves, and it hasn’t been full for many decades. In fact, it’s been… pic.twitter.com/zaC2MVnIqq

(Related: ‘They Got What They Asked For’: Trump’s ‘Save America’ Releases New Ad Featuring Harris as Gas Prices Surge & More)