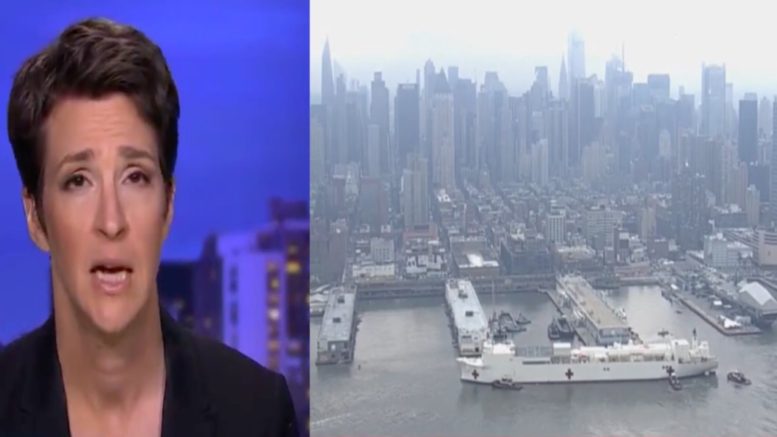 The USNS Comfort has arrived at the front lines of the coronavirus fight after the Commander in Chief bid bon voyage to the Navy hospital ship from Norfolk, Virginia on Saturday

The Navy hospital ship, which contains 1,000 beds, a dozen operating rooms, a medical laboratory, a pharmacy and more, sailed into New York City harbor on Monday.

“With the courage of our doctors and nurses, with the skill of our scientists and innovators, with the determination of the American people and with the grace of God, we will win this war, and we will win this war quickly, with as little death as possible,” the president vowed. “And when we achieve our victory, this victory, your victory, we will emerge stronger and more united than ever before. We are going to be at a level of preparedness, in case something should ever happen like this again. And, God willing it won’t.”

“I cannot be more thankful to the American people, and I can say this from the bottom of my heart, I am very proud to be your president,” the Commander in Chief proclaimed, before saluting the USNS Comfort.

As the ship docked at Manhattan’s Pier 90 on Monday, New York Governor Andrew Cuomo said, “There she is.”

“If there is ever a time that we need to work together it is today,” he added. “The president is right –-this is a war. And what does this nation do when it’s at war? It comes together and it acts as one.” Continued Below

It’s not the first time the USNS Comfort has been in New York City. The Navy said it was deployed there a day after the September 11, 2001, terrorist attacks and spent three weeks aiding first responders at Ground Zero.

On the West Coast, President Trump has deployed the USNS Mercy hospital ship to Los Angeles, where it is now serving “as a referral hospital for non-COVID-19 patients” who are currently hospitalized on land. Videos Below

Meanwhile, MSNBC’s Rachel Maddow had claimed on March 20: “There is no sign that the Navy hospital ships that the president made such a big deal of, the Comfort and the Mercy– there’s no sign that they’ll be anywhere on sight, helping out anywhere in the country for weeks yet.”

“The president announced that those ships would put in action against the COVID-19 epidemic. He said, ‘One of those ships would be operational in New York harbor by next week’. That’s nonsense. It will not be there next week,” Maddow said.

The Mercy arrived in L.A. on Friday, March 27, just one week after Maddow claimed it would not be. The USNS Comfort arrived in New York City’s harbor on Monday, March 30 after undergoing maintenance.

New York Gov. Andrew Cuomo tweeted on Monday about the Comfort’s arrival and said he is holding a briefing upon its arrival.

The Comfort brings 1,000 much-needed hospital beds & 1,200 personnel to New York. I'll be in NYC to receive a briefing upon its arrival. pic.twitter.com/VpHpjymsow