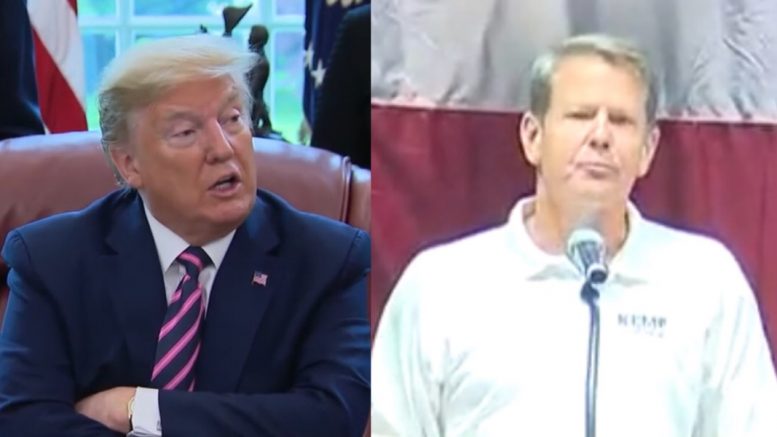 Georgia Governor Brian Kemp (R) was loudly booed off stage at an event — hosted by the Georgia Republican Party on Saturday — by an apparent furious crowd over what appeared to be his betrayal to President Donald J. Trump and the Republican Party– as he is stonewalling a forensic audit into the 2020 general election.

45th President Trump issued a statement via email from his “Save America” PAC on Wednesday highlighting the angry crowd who had booed Kemp and said that “the people get what happened in Georgia, and elsewhere!”

Wow, the Governor of Georgia, Brian Kemp, was booed off the stage Saturday at a Georgia Republican Party event. They wouldn’t let him speak.

It is amazing how the people get what happened in Georgia, and elsewhere! The election was rigged, and everybody knows it.

Kemp refused to call a Special Session of the Legislature, and did absolutely nothing. Now our Country is going to hell! Video Below

I have yet to attend a Brian Kemp speech where he hasn’t been BOO’ed off the stage.

Brian Kemp booed in Georgia and called a sack of shit pic.twitter.com/7yoV22f1Hf

More evidence on that dead cat involving election fraud in Fulton County, GA. I’ve called for a 159 County audit. Now, I’m calling for an impeachment of ⁦@BrianKempGA⁩. Move on it GA State Senate. It’s time to “Take Georgia Back,” even from RINOs. https://t.co/7UpWmKP4jU

See @BrianKempGA, look how easy it is to resign.

At least you can hold your head high because you’re not a creep like Cuomo.

You only sold out to the Democrats and Stacey Abrams when Georgia needed you most.#TakeGeorgiaBack

The people of Georgia have not forgotten @BrianKempGA betrayal, Mr. President.

That’s why I’m running. He didn’t just cost us our state; he cost us the country. pic.twitter.com/3TGJL57BsL