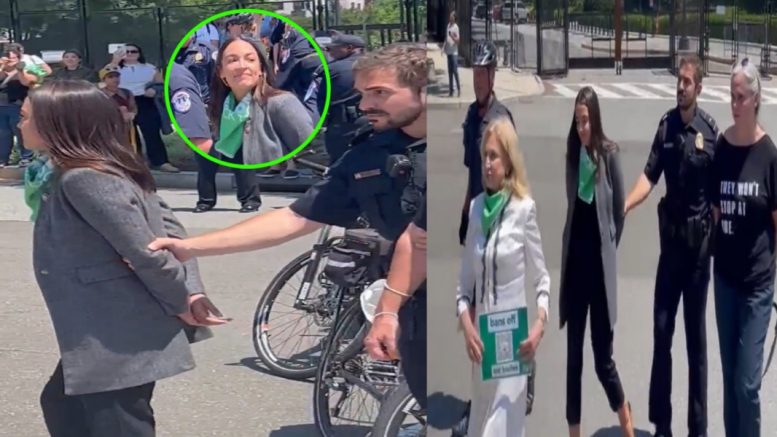 Rep. Alexandria Ocasio-Cortez (D-NY) appeared to pretend to be handcuffed on Tuesday when she was escorted away by Capitol Police during a pro-abortion Supreme Court protest.

Other members of Congress were also detained by law enforcement for blocking traffic outside the Supreme Court at the demonstration.

Rep. Alexandria Ocasio-Cortez was seen being walked away by an officer alongside another protestor with her hands crossed behind her back, both of which had green bandanas, with the color being associated with the pro-abortion group Rise Up 4 Abortion Rights and pro-abortion protests across the country, Hannah Nightingale at The Post Millennial reported.

.@AOC has just been escorted by police away from the Supreme Court. pic.twitter.com/F9DOoLq8yJ

Multiple members of Congress, including @AOC, being arrested by Capitol Police for blocking traffic outside the Supreme Court in abortion rights demonstration: pic.twitter.com/fysQN1oBAw

US Capitol Police said that demonstrators had illegally blocked First Street NE, which runs alongside the Supreme Court and the Capitol Building. They said that three warnings had been issued, and made arrests, with the street being cleared just after 1:30 pm.

About two dozen members of congress protesting in front of the Supreme Court on choice
Police:
“Cease and desist or you will be arrested” pic.twitter.com/31CFfVVxQs

We have already given our standard three warnings.

Some of the demonstrators are refusing to get out of the street, so we are starting to make arrests.

Final members of congress, including @AOC, are let out after being arrested at abortion rights rally outside Supreme Court @itvnews pic.twitter.com/hBYSkGEbri

Rep. Cori Bush claimed that the SCOTUS “will not stop us”.

The Supreme Court will not stop us. Even though they arrested us, we won’t stop our organizing, agitating, and legislating for justice.