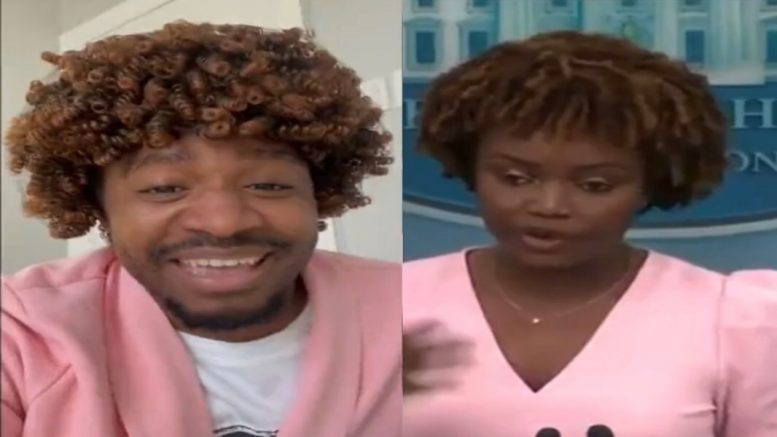 Comedian Terrence Williams posted a video on Twitter Sunday evening, appearing to mock White House press secretary Karine Jean-Pierre over not being able to provide an update to a reporter amid the baby formula shortage in the U.S.

Williams, in a now viral video — side by side with Jean-Pierre — donned a light pink jacket, along with a wearing a short curly wig, seemingly imitating the press secretary’s image.

“What is the latest update the White House has received on the current formula situation across the country,” a reporter asked Jean-Pierre last week.

The White House press secretary flipped through her note book for several seconds unable to provide an answer to the reporter.

Meanwhile, Terrence Williams acted out the exchange, flipping through notes before he began to laugh.

“… We don’t have no plans right now,” Williams said, impersonating the press secretary. “What kind of answer is that?”

“Who Wore it Better? Someone come take my phone. I need to stop,” Williams also wrote in a post with the now viral video.

Who Wore it Better ? Someone come take my phone. I need to stop 😂 pic.twitter.com/PJiArXI16t

Doocy Confronts Jean-Pierre Over her ‘Stolen Election’ Tweets: ‘If Denying Election Results is Extreme Now, Why Wasn’t it Then?’