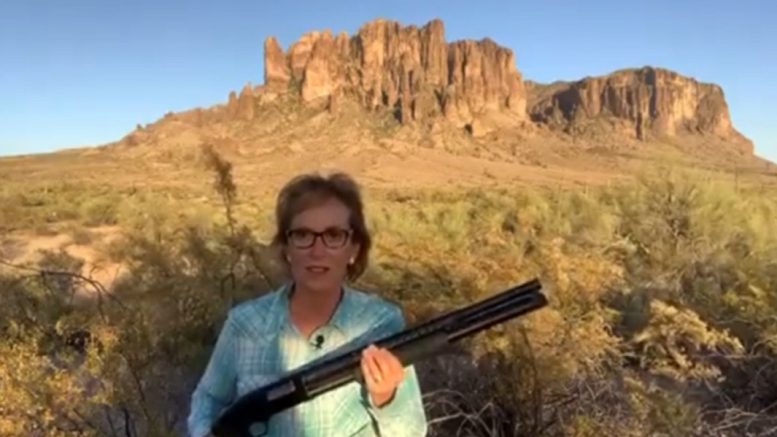 While holding a Mossberg 12 gauge pump-action shotgun in the Superstition Mountains at Lost Dutchman State Park, Arizona State Senator Wendy Rogers (R), in a campaign video message, vowed to “protect our right to keep and bear arms” from “global communists in our country and around the world [who] want Americans disarmed”.

“Our nation has a crime problem. I want to talk to you about self defense and the right to keep and bear arms,” she said.

“Most of these tragic shootings we hear about occur in gun free zones. The shooters pick places they consider to be soft targets. That’s why I proposed campus carry, which cleared the Arizona Senate Judiciary Committee to allow students over 18, who have a conceal carry permit, to carry on campus for their own protection,” Senator Wendy Rogers said.

In January, the Arizona Senate Judiciary Committee passed SB 1123, which would allow individuals with concealed weapon permits to have firearms on Arizona’s college campuses if fully approved, joining other states like Utah and Colorado. The bill passed 4-3.

“That’s why proposed and got passed into law declaring firearms manufactures and retailers as essential businesses. That is why I support school resource officers, as well as arming trained teachers and administrators as they do in Israel and other states in our country,” the Arizona lawmaker said.

Last May, Governor Doug Ducey signed Senate Bill 1382, which protects against frivolous gun lawsuits and declares that stores that sell firearms and ammunition are essential businesses, which ensures that they can’t be shut down during a future declared emergency.

“In almost every instance where someone was on the scene with a firearm, the violent criminal was neutralized,” Senator Rogers said in the video while holding a shotgun used by law enforcement. “We need more good guys with guns.”

“The global communists in our country and around the world want Americans disarmed, so they can treat us as the people in China are treated; lockdowns where people are bolted into their homes and not allowed to leave, parents being dragged off to Covid-camps and children left to vend for themselves or worse,” she explained. “Tyranny must never be allowed to thrive in this country.”

“Our right to keep and bear arms protects everyone. It protects our schools. It protects our families. It protects you and me. To protect our gun rights, please reelect me to the Arizona Senate,” Senator Rogers, former United States Air Force lieutenant colonel, urged. Video Below

We must protect our right to keep and bear arms. #2A pic.twitter.com/BIi9HmsuPO

The Arizona State senator has also been endorsed by the National Association for Gun Rights:

Honored to have the endorsement of the @NatlGunRights PAC! Thank you for all you do defending our right to keep and bear arms! #2A #ShallNotBeInfringed pic.twitter.com/4IPs37VrIR

She is also endorsed by Gun Owners of America:

Honored to have the endorsement of Gun Owners of America. Thank you. I will always defend your right to keep and bear arms! #2A @GunOwners pic.twitter.com/VYUwlEoUiL