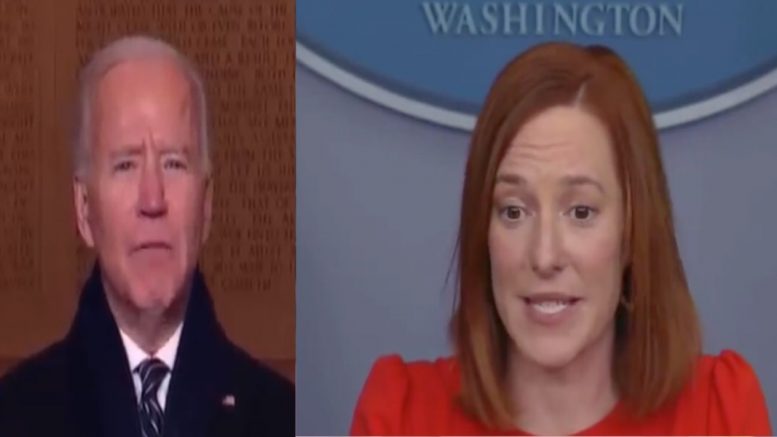 During a White House press briefing Thursday, press secretary Jen Psaki was pressed by Fox News’ Peter Doocy over why Joe Biden had appeared maskless at the Lincoln memorial Wednesday evening right after he had signed an executive order requiring mask-wearing on federal property.

“Why weren’t President Biden and members of the Biden family masked at all times on federal land last night if he signed an executive order to mandate masks on all federal lands at all times?” Doocy asked the new White House press secretary.

“I think [Biden] was celebrating an evening of a historic day in our country,” Jen Psaki said.

“And certainly, he signed the mask mandate because it’s a way to send a message to the American public the importance of wearing masks, how it can save tens of thousands of lives. We take a number of COVID precautions as you know in terms of testing, social distancing, mask wearing ourselves as we do every single day. But I don’t know that I have more for you on that,” she continued.

Doocy then wondered, “But as Joe Biden often talks about, it is not just important the example of power, but the power of our example. Was that a good example for people who are watching who may not pay attention normally?”

“Well, I think the power of his example is also the message he sends by signing 25 executive orders, including almost half of them related to COVID. The requirements that we’re all under every single day here to ensure we’re sending that message to the public. Yesterday was a historic moment in our history. He was inaugurated as President of the United States. He was surrounded by his family. We take a number of precautions. But I think we have bigger issues to worry about at this moment in time,” Psaki claimed. Video Below

Psaki hesitated, beat around the bush, then said "we have bigger issues to worry about."

Joe Biden appeared maskless at the Lincoln memorial Wednesday evening after he had signed an executive order requiring mask-wearing on federal property: