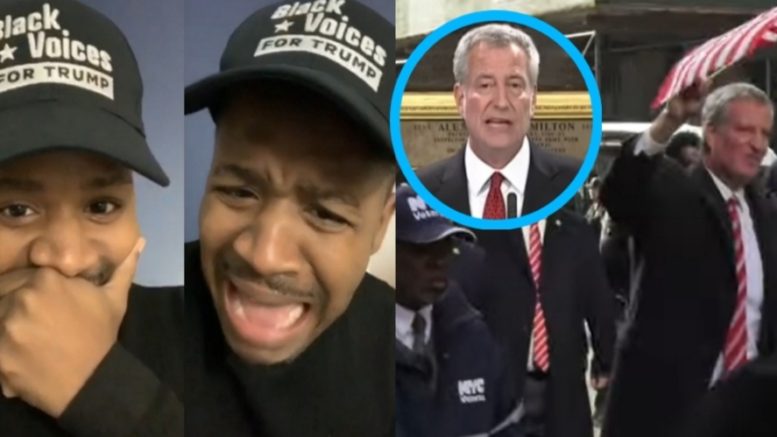 Video footage captured de Blasio getting booed and cussed at from bystanders at the parade who told him to “get out of the city.”

Conservative comedian Terrence Williams issued another one of his classic video commentaries after seeing footage of de Blasio getting blasted by his own citizens.

“Blasio, they don’t even want you in your own city,” Terrence said. “You forgot about the people of New York City.”

“Do what they told you to do! Get your butt out of the city” Terrence suggested. “Step down as mayor and go bye bye. New York City don’t want you no more! You ain’t no good.”

“You don’t even care about the police officers in your own city. You don’t support them the way you should be supporting them. They don’t mess with you!” he continued. “You put New York City last. They can’t get down with you no more, Blasio!” Video Below

Terrence then questioned why the media isn’t showing the video of de Blasio get booed on television like some left-leaning sources did when President Trump was booed at recent sporting events.

“Why is CNN not showing this? MSNBC, where ya’ll at? Rachel Maddow, where ya’ll at? Anderson Cooper, why ya’ll not playing this?” he asked. “Why? Why? Why? I wanna know, why?! But ya’ll quick to play a clip of two people booing Trump.” Video Below

BLASIO WAS BOOED! WHY WONT CNN OR MSNBC SHOW THIS ON TV

THE PEOPLE OF NYC TOLD HIM TO GET OUT THE CITY!

If this was Trump it would be trending. The media is hiding
👉 #BlasioWasBooed pic.twitter.com/jESbLIbtrn

Reporter to Lightfoot: ‘How Could you Possibly Even Consider Running for Re-election…After all the Harm You’ve Caused?’

Chicago Mayor Lightfoot: ‘Your Time Is Up…This Health Order May Pose An Inconvenience…It Is Inconvenient By Design’

Joe Biden: ‘There’s Going to Be a New World Order Out There & We’ve Got to Lead It’