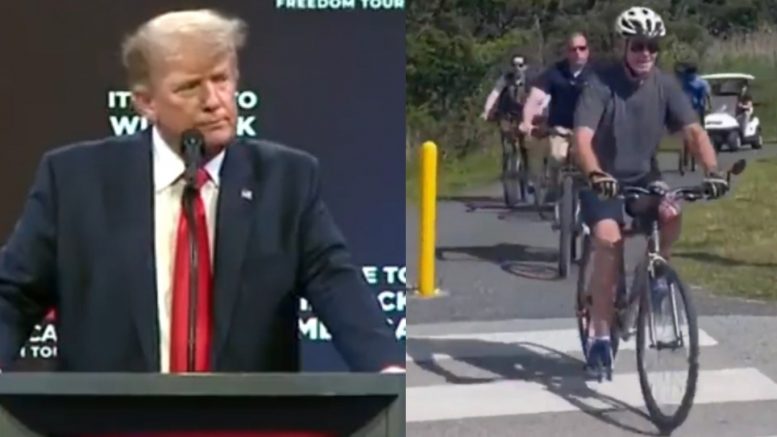 A video surfaced showing 45th President Donald Trump’s initial reaction after learning that Joe Biden fell off of his bike in front of a crowd of spectators over the weekend.

According to CNN, “Biden took a tumble when he was finishing a bike ride alongside first lady Jill Biden. The President deviated from the group as he biked over to a crowd that had gathered nearby. Biden came to a stop and appeared to get his foot caught on the pedal while trying to dismount…US Secret Service agents quickly helped the President up after his fall.”

In response, Trump stated as follows, while speaking at the American Freedom Tour in Southaven, Mississippi on Saturday:

“One of the greatest travesties of all is to see a person in the White House who, even years after political experience, has absolutely no clue how to be the president of the United States and I hope he has recovered because, as you know, he fell off his bicycle today. No, I’m serious. I hope he’s OK. Fell off a bicycle.

“I make this pledge to you today: I will never, ever ride a bicycle.”

TRUMP: “I make this pledge to you today: I will never, ever ride a bicycle."pic.twitter.com/M91fvyhtJ0