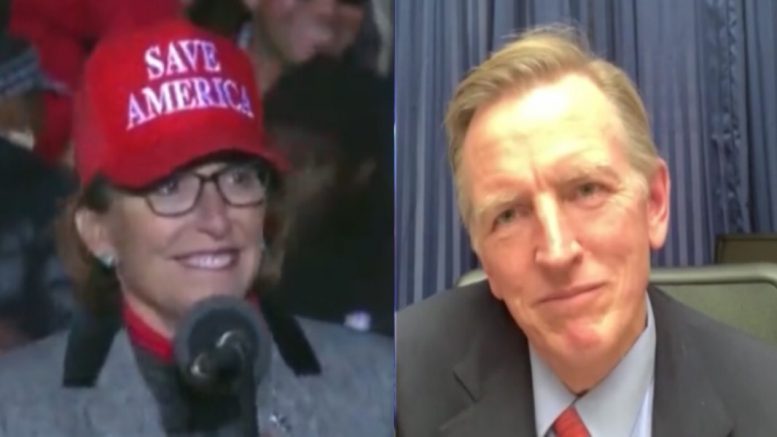 The six-term congressman currently represents Arizona’s 4th Congressional District, but due to redistricting, he’s seeking reelection in a new district that covers most of Arizona’s western border, including parts of La Paz, Maricopa, Mohave, and Yuma counties, AZ Central reports.

“I endorse Congressman Dr Paul Gosar for Congress. He has been one of our best fighters in DC. He takes more hits than anyone I know. He triggers the radical left better than anyone I know,” Senator Wendy Rogers expressed in a statement on Twitter.

Last year, the slim Democratic House majority voted to censure Rep. Gosar and strip him of his committee assignments after a member of his staff posted an anime video on Twitter and Instagram, which he had deleted, that reportedly depicted him killing Rep. Alexandria Ocasio-Cortez (D-NY), and swinging swords at Joe Biden, as previously reported by The Freedom Times.

The resolution passed in a 223-207-1 vote, with two alleged Republicans joining every Democrat in voting for the measure: Reps Liz Cheney (R-WY) and Adam Kinzinger (R-IL).

Senator Rogers continued: “He proposes and fights for the most conservative legislation to include an immigration moratorium. No one will protect our guns, secure our border or defend America better than Paul Gosar. Please join me in supporting his reelection.”

“Wendy is a fighter for America First. She has my endorsement and honestly I wish we had more like her in legislature,” he said in a statement.

“My friend ⁦[Senator] Wendy Rogers⁩ is endorsed by me and President Trump. She’s a true patriot and fighter for Arizona. The Left attacks her relentlessly. We support her just as relentlessly,” Rep. Gosar added.

“Because you have been attacked so much we know you are a battle-hardened warrior for our country. I will not let you or the country down. #AmericaFirst”, she said.

immigration moratorium. No one will protect our guns, secure our border or defend America better than Paul Gosar. Please join me in supporting his reelection. (2/2)

Amazing endorsement. Thank you Congressman Paul Gosar! Because you have been attacked so much we know you are a battle-hardened warrior for our country. I will not let you or the country down. #AmericaFirst https://t.co/Ccu0Wlj05d

In a statement last November, 45th President Trump said, “Congressman Paul Gosar has been a loyal supporter of our America First agenda, and even more importantly, the USA. Paul is a Congressman who is highly respected in Arizona, strong on Crime, Borders, our Military, and our Veterans. He continually fights for Lower Taxes, Less Regulations, and our great, but under siege, Second Amendment. Paul Gosar has my Complete and Total Endorsement!”

Trump also endorsed Senator Rogers last November, writing in a statement, Arizona State Senator Wendy Rogers is doing everything in her power to find out the truth of the 2020 Election, and to hold people accountable for Election Fraud in Arizona. Wendy is a MAGA warrior who loves our Country and listens to her constituents. She has a truly great fighting spirit, is strong on Law and Order, securing our Border, and gun rights. Wendy Rogers has my Complete and Total Endorsement for reelection to the Arizona State Senate because she FIGHTS!”