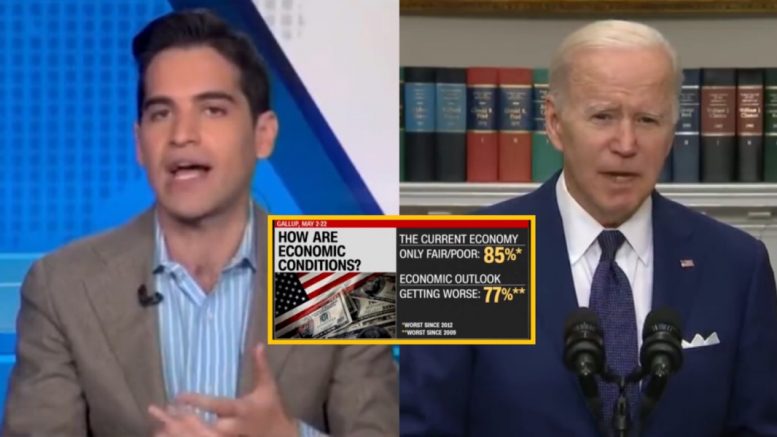 CNN’s senior data reporter Harry Enten reported Monday that “85% of Americans say that the current economy — they rate it at fair or poor”, adding, “That’s the worse since 2012”.

“Americans are really not happy” with the Biden economy, Harry Enten said.

CNN: "Americans are really not happy" with the Biden economy.

🚨 77% say the economy is getting WORSE — "the worst since 2009" pic.twitter.com/nqlhJMcObO

Enten also reported that 51% of voters say their economic views are closer to the Republican Party as the economy worsens under Joe Biden.

CNN: As the economy continues to sour under Joe Biden, 51% of voters say their economic views are closer to the Republican Party.

Meanwhile, the average national retail price for a gallon of regular gasoline is projected to surpass $6 by the of summer. According to JP Morgan, prices could surge another 37% by August, hitting a $6.20 per gallon national average, as previously reported by The Freedom Times.

Last month, CNN appeared to admit that Joe Biden and his administration’s policies are to blame for record high gas prices, saying that the United States is “not producing as much [oil] as it use to”.

"The U.S. is not producing as much [oil] as it used to…so prices have nowhere to go but up." pic.twitter.com/nhs3PxkRnL

Related: NBC News: ‘The Rise in Record Gas Prices has Been Relentless–Analysts are Predicting $6 per Gallon by Labor Day’