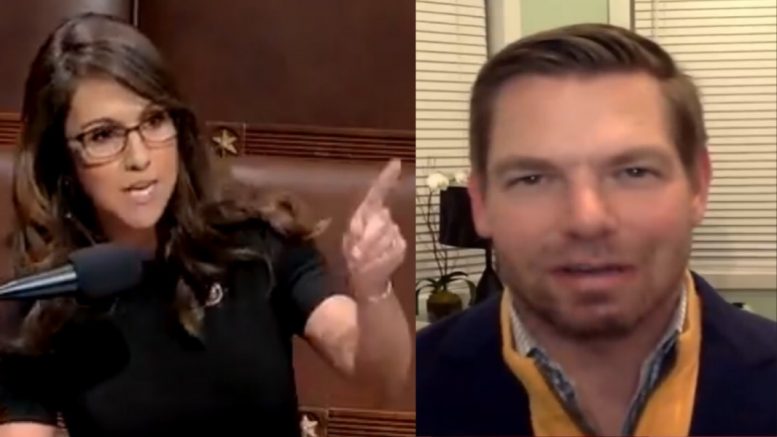 The slim Democratic House majority, on Wednesday, voted to censure Rep. Paul Gosar (R-AZ) and strip him of his committee assignments after a member of his staff posted an anime video on Twitter and Instagram, which he had deleted, that reportedly depicted him killing Rep. Alexandria Ocasio-Cortez (D-NY), and swinging swords at Joe Biden.

The resolution passed in a 223-207-1 vote, with two alleged Republicans joining every Democrat in voting for the measure: Reps Liz Cheney (R-WY) and Adam Kinzinger (R-IL). The resolution to censure Gosar for the video was first introduced by Rep. Jackie Speier (D-CA) and nine other Democratic lawmakers.

Gosar shared the edited video on his official social media channels last week. It featured a scene from Japanese anime series “Attack on Titan,” with Gosar’s face superimposed on a character bearing two swords and attacking giant characters with Ocasio-Cortez and Biden’s faces. The video also included images of Border Patrol officers with migrants at the U.S.-Mexico border, CNBC reported.

Ahead of the House vote, Rep. Gosar said on the House floor Wednesday, “I do not espouse violence towards anyone. I never have. It was not my purpose to make anyone upset”, adding that he rejects what he called a “false narrative” that the video encouraged violence.

Rep. Lauren Boebert (R-CO) defended her Republican colleague on Wednesday during debate on the House floor, shining light on Democrats’ own questionable behavior.

“Democrat policies are so pathetic and have done so poorly that the left has nothing else to do but troll the internet, looking for ways to get offended and then, try to target members and strip them of their committees,” the Colorado congresswoman said. “This is a dumb waste of the House’s time.” Continued Below

“But since the Speaker has designated to discuss members inappropriate actions, shall we? The Jihad squad member from Minnesota has paid her husband, and not her brother-husband, the other one, over a million dollars in campaign funds. This member is allowed on the Foreign Affairs Committee, while praising terrorist,” Rep. Boebert said of Congresswoman Ilhan Omar (D-MN), citing allegations that Omar married her brother to assist his entry to the United States.

Rep. Bobert also appeared to mention Congresswoman Maxine Waters, saying, “A Democrat chairwoman incited further violence in the streets outside of a courthouse”.

In 2018, Waters called on her supporters to publicly confront and harass members of the Trump administration. And in April of this year, Waters crossed state lines to march with protesters in Brooklyn Center, Minnesota, urging demonstrators to “stay on the street” and “fight for justice” if Derek Chauvin was acquitted in his trial, as reported by Swamp Drain. Continued Below

“And then, the cherry on top: my colleague and three-month presidential candidate from California, who is on the Intelligence Committee, slept with Fang-Fang, a Chinese spy,” Bobert continued, referring to Rep. Eric Swalwell.

According to a report by Axios that was released last year in December, Rep. Swalwell was targeted by a Chinese national named Fang Fang — aka Christina Fang — an alleged operative for China’s Ministry of State Security, which is the country’s intelligence organization.

“Let me say that again: a member of congress … was sleeping with the enemy! This is unacceptable,” Bobert declared on the House floor. Continued Below

Since Pelosi wants to talk about the inappropriate actions of members, shall we… pic.twitter.com/0AsmdtmZc0

Rep. Paul Gosar’s remarks on the House floor before being censured:

"I do not espouse violence towards anyone. I never have. It was not my purpose to make anyone upset." pic.twitter.com/a6JI4xxqgt

Wow, @laurenboebert goes for a gut punch (metaphorically people). I am so thankful she is on our side, the side of patriots and real Americans. Watch the clip below and then send her some love. https://t.co/hFRCiGs5GO

This anime video is why Gosar was censured by congress just now and stripped from committee assignments. pic.twitter.com/0sjvg12fww

‘This Is My New Sign Outside My Office’: Rep. Greene Enlarges Kamala Harris’ 2020 Tweet Over Helping ‘Post Bail for Those Protesting on the Ground in Minnesota’