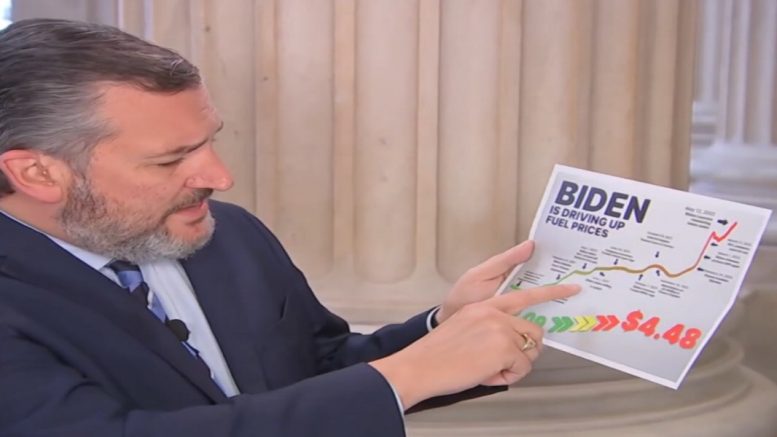 During a Tuesday interview on CNBC’s “Squawk Box”, Senator Ted Cruz (R-TX) explained with a detailed graph how Joe Biden and his administration’s policies have resulted in “an assault on American energy”.

Joe Biden has put in place policies that are designed to do everything possible to crush American energy production.

“If you look at his record, it has been a relentless result all designed to do everything possible to stop domestic energy production, to stop production of oil in the United States, … natural gas, and it’s had its intended effect,” the Texas Senator said.

Joe Biden promised an assault on American energy and he has kept that campaign promise! #BidenGasHike pic.twitter.com/TYbPOaN6qD

The average price per gallon of gasoline hit a record $4.59 on Monday, which is 47 cents more than a month ago, and all 50 states average prices above $4 per gallon, according to AAA.

While speaking with reporters during a press conference in Tokyo on Monday, Joe Biden was asked, “In your view, is a recession in the United States inevitable?”

In response, the Democrat career politician claimed, in part, over the rising gas prices, “we’re going through an incredible transition”, suggesting that America and “the world” will be “less reliant on fossil fuels”.

“When it comes to the gas prices, uh, we’re going though an incredible transition that is taking place that, God willing, when it’s over, we’ll be stronger and the world will be stronger and less reliant on fossil fuels, when this is over,” Biden alleged.

Joe Biden: "When it comes to the gas prices, we're going through an INCREDIBLE transition" pic.twitter.com/8TGnc7vFa8

During the 2020 campaign, Joe Biden said that his administration would “transition from the oil industry” and repeatedly called for no new drilling on public lands, as previously reported by this publication.