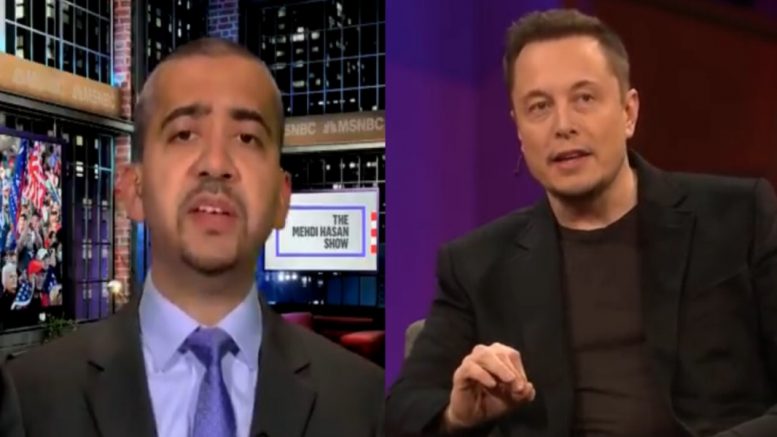 Elon Musk ripped NBC News on Monday in response to comments made by a MSNBC host who alleged that the business magnate purchased Twitter and turned it over to “the far-right.”

MSNBC’s Mehdi Hasan appeared to downplay the far-Left by asserting that they only want to “give us free health care and free childcare”, while claiming that the far-right “wants to give us white supremacy and no democracy.”

“And this asymmetrical polarization of U.S. politics would be laughable if it weren’t so horrifying,” Mehdi Hasan said. “We are living through an unspeakably dangerous moment, the pro-QAnon, pro-neo Nazi faction of the Republican Party is poised to expand dramatically come the midterms.”

“If that happens, we may look back on this past week as a pivotal moment when a petulant and not so bright billionaire casually bought one of the world’s most influential messaging machines and just handed it to the far right,” Hasan claimed.

NBC’s @mehdirhasan on @elonmusk: "If [the “neo-Nazi faction" of the GOP expands in Nov.], we may look back on this .. as a pivotal moment, when a petulant & not-so-bright billionaire casually bought one of the most influential messaging machines & just handed it to the far-right” pic.twitter.com/bIpiIlFlwR

Hasan’s remarks about Musk come after Twitter’s board of directors unanimously approved an acquisition by Musk last week in a $44 billion sale valued at $54.20 per share. Continued Below

Elon also responded to another post, over Ghislaine Maxell’s trial. Musk wondered, “Where is their ‘client’ list? Shouldn’t at least one of them go down!?”

He added, “Hey, why are they already writing my suicide story!?”

Where is their “client” list? Shouldn’t at least one of them go down!?

Hey, why are they already writing my suicide story!?

Last week, Elon also said that “the far left hates everyone, themselves included!”

But I’m no fan of the far right either.

He further posted a comical meme of the “left” and the “right”.