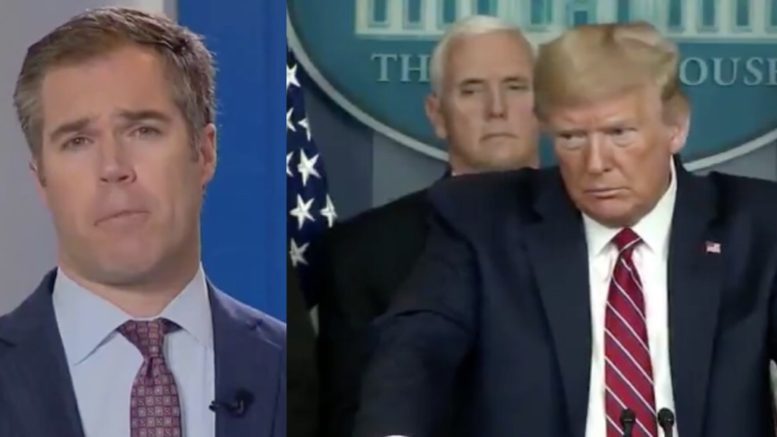 Members of the Coronavirus Task Force held a press briefing Friday to give an update on the COVID-19 pandemic.

During the briefing, President Donald Trump took questions from reporters and lambasted NBC’s White House correspondent, Peter Alexander, and the company he reports to for promoting “sensationalism”. The push back was the result of Alexander challenging the president’s statement that he was hopeful about the efficacy of a drug that may help with the coronavirus.

“The American people are looking for answers and they’re looking for hope,” the president told Alexander. “And you’re doing sensationalism. And the same with NBC and Comcast. I don’t call it Comcast, I call it Concast, for whom you work.”

After his interaction with President Trump, Peter Alexander spoke with anchor Andrea Mitchell on MSNBC, complaining that President Trump “took it out on me.” (Continued Below)

Andrea Mitchell told viewers that President Trump exploded on Alexander, and let the White House correspondent explain his side of the story, pertaining to the interaction he had with the president at Friday’s Coronavirus Task Force press briefing.

“You and I are baseball fans. … In TV terms, we call this a softball. I was trying to provide the president an opportunity to reassure the millions of Americans, members of my own family, and my neighbors in my community, and plenty of people sitting home right now,” he said. “This was his opportunity to do that– to provide a sort of positive or uplifting message, instead you saw the president’s answer to that question.”

“I think it sort of does reveal a frustration, perhaps an anxiety, about his own political prospects and about a situation that’s hard to keep in control as we continue to witness it spiral at this time,” the NBC White House correspondent suggested. (Video Below)

“The bottom line is this is a president whose experiences in life are very different than most Americans across this country right now– not a person who likely worries about finances, or not a person in the course of his life, worried about his future, but not a person who’s worried about where he’ll find a paycheck for his bills or his rent,” Peter Alexander claimed.

“And as evidence by the president, suggesting that an opportunity to provide Americans some reassurance about how they should feel right now, the president instead took it out on me,” he complained.

2⃣Alexander attacks Trump's positivity, accuses him of "misrepresenting," implies people should not have hope. pic.twitter.com/GQOqqa2hwq

Peter Alexander responds after his interaction with President Trump:

Peter Alexander responds after his interaction with President Trump:

“In T.V. terms we call this a softball. I was trying to provide the president an opportunity to reassure the millions of Americans…the president instead took it out on me.”pic.twitter.com/4vJrEzC6WY

I offered both Pres Trump and VP Pence an opportunity to reassure Americans.

Simple question: “What do you say to Americans who are scared?”

Trump, to me: “I say, you’re a terrible reporter.”

Pence, an hour later: “Don’t be afraid. Be vigilant.”

Doocy To Psaki: ‘Is Somebody Asking’ Migrants In ‘Del Rio, Texas’ For ‘Proof Of Vax Or Negative COVID Test?’