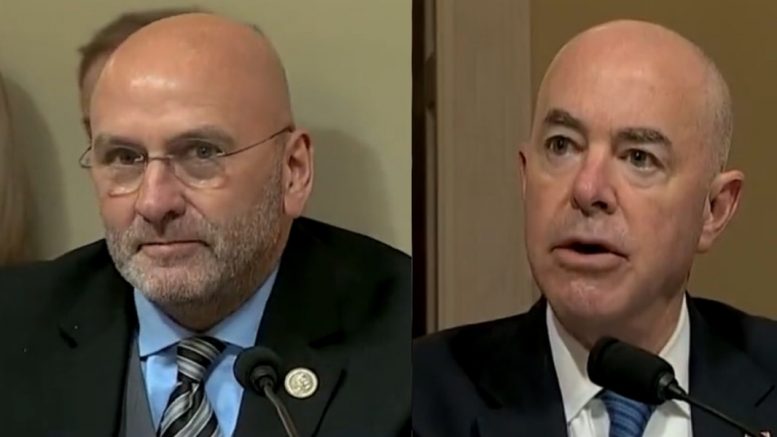 During a House Appropriations DHS Subcommittee hearing on Wednesday, Rep. Clay Higgins (R-LA) told Department of Homeland Secretary Alejandro Mayorkas that he will “face impeachment” if Republicans take back the House in the November midterms.

The hearing comes just days from the elimination of the Title 42 health policy, currently in place at the southern border — which will end next month.

“I’m gonna try to help put this in perspective for you, sir. I’ve had harsh words for you over the last couple of years,” Rep. Higgins told Sec. Mayorkas. “I hope you feel my spirit right now. I’m also a compassionate man.”

“I feel that America needs you to own this thing, good sir,” the Louisiana lawmaker told the DHS Secretary regarding the crisis at the southern border.

“Do you recognize the following statement? You wrote it, or someone for you wrote it. ‘Under the Biden/Harris administration, the Department of Homeland Security has been executing a comprehensive and deliberate strategy to secure our borders and build a safe, orderly, and humane immigration system. Since January 20, 2021, DHS has effectively managed an unprecedented number of non-citizens seeking to enter the United States'”, Rep. Higgins said, reading aloud Mayorkas’ previous remarks.

“Effectively managed. You used that verbiage earlier today. … I suppose that’s the detested and determined talking point. So I ask you, good sir, tell America — you’re a gentleman, 62 years of age, a gentleman of distinguished accomplishment. You’re secretary of homeland of security. Like all of us, you’ve experienced failure in the course of your life. You should have a compass to help you recognize it,” he told the DHS secretary. Continued Below

“This disaster we have at our border — the disintegration of our national sovereignty cannot be sustained. Anyone that has two brain cells that could perhaps bump into each other, would know that this is a abject failure down there,” the Louisiana congressman said.

“If you would identify our border as effectively managed right now, how would identify failure?” he asked Mayorkas. “… By God, man. Own the moment. You’ve been called upon to resign by myself and others.”

“Next year, if we have the majority in this committee, which we shall, [if] you’re still in office, you’ll face impeachment,” Rep. Higgins directly told the DHS secretary. Continued Below

“I ask you as a man, own this thing. Out of respect for you, the office, I ask you to reflect upon that. I’ll give you my remaining 45 seconds to respond. Please feel my spirit and speak truthfully. Step away from your talking points, and speak to the American people, and own this thing. We’re losing our country down there. We need you to resign. Save the country the pain of your impeachment,” Rep. Higgins told Mayorkas.

“Congressman, I couldn’t disagree with you more when you state that our nation’s sovereignty is disintegrating,” the DHS secretary replied.

"America needs you to own this … if we have the majority you will face … impeachment. I ask you as a man, own this thing." pic.twitter.com/71HzlBBgwR

DHS Secretary, today: "We have effectively managed" the border

DHS Secretary, August: “This is unsustainable. These numbers cannot continue"

The border crisis has gotten WORSE since August. pic.twitter.com/crey4ApCJG

(Related: Democrat Texas Mayor: “It Is A Biden Border Crisis…Because There’s No Plan of Action”)

Ken Starr On Dems’ ‘Anti-Constitutional’ Impeachment: “The Senate Is Utterly Without Jurisdiction To Try Donald Trump”