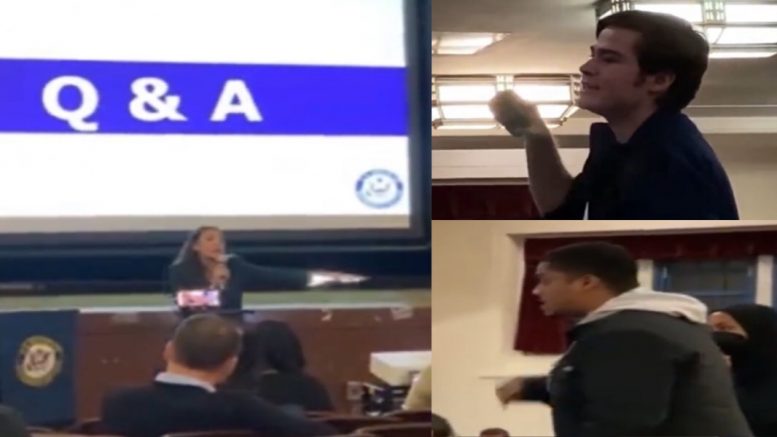 While speaking at a Town Hall event on legislative victories and opportunities for constituents, Democratic New York Rep. Alexandria Ocasio-Cortez was confronted by anti-war protesters for what they believe as “her support for nuclear war and Ukrainian Nazis”.

In a video shared to Twitter by user Jose Vega, the confrontation can be heard as he and friend Kynan Noggatone voiced their frustration at the congresswoman, calling her “a coward”, “liar”, and “the establishment” after former Rep. Tulsi Gabbard (D-HI) officially announced she was leaving the political party Monday.

“Congresswoman, none of this matters unless there’s a nuclear war, which you voted to send arms and weapons to Ukraine,” Kynan Noggatone shouted to the New York Democrat representative.

“Tulsi Gabbard, she’s left the Democratic party, because they’re war hawks!” he said. “You originally voted — you ran as an outsider. Yet, you’ve been voting to start this war in Ukraine. You’re voting to start a third nuclear war with Russia and China”.

Jose Vega joined in, accusing Ocasio-Cortez of sending “money to Ukrainian Nazis” and called her a coward. “You’re a progressive socialist? Where are you against the war? Mobilization?” he asked.

“He is telling the truth! You have done nothing. Tusi Gabbard has shown guts, where you’ve shown cowardice. I believed in you, and you became the very thing you sought to fight against. That’s what you’ve become. You are the establishment,” Vega told AOC.

“… You’re the liar here. Nobody has [held] you accountable. It is time for you to stand up and realize what you’ve been saying is lies,” Vega said. “Let your conscious come through for once”.

My friend @Noggatone and I confronted Congresswoman @AOC on her support for Nuclear War and Ukrainian Nazis. I call her out for being a coward in the face of the party that will push us all into Nuclear war right now. Will she stand up like @TulsiGabbard and fight for peace? pic.twitter.com/aQiQvQSWIN

Crenshaw Counters AOC After She Tells Him To ‘Do Something’ About Terrorist Killings: ‘I Did Defend 9/11 Victims’