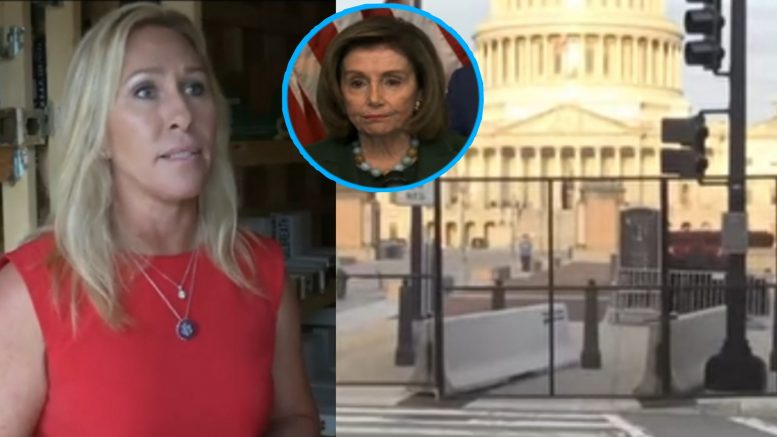 Rep. Marjorie Taylor Greene (R-GA) responded in a statement on Thursday as fencing around the Capitol in Washington, D.C. is in “discussions and remains an option”, according to Capitol Police — ahead of 79-year-old Joe Biden’s State of the Union address.

U.S. Capitol Police are bracing for a potential “Freedom Convoy” truck protest to Washington, D.C., for the March 1 speech. “Freedom Convoy” truckers have been protesting in Canada for weeks against coronavirus restrictions and vaccine mandates and caused a temporary blockade of the busy Ambassador Bridge border crossing between Windsor and Detroit, Fox News reported.

The U.S. Capitol Police said in a statement February 18:

Law enforcement agencies across the National Capital Region are aware of plans for a series of truck convoys arriving in Washington, DC around the time of the State of the Union. As with any demonstration, the USCP will facilitate lawful First Amendment activity.

The USCP is closely coordinating with local, state and federal law enforcement agencies, including DC’s Metropolitan Police Department, the United States Park Police, the United States Secret Service and other allied agencies to include the DC National Guard.

The United States Capitol Police and the United States Secret Service have been closely working together to plan for the upcoming State of the Union. The temporary inner-perimeter fence is part of those ongoing discussions and remains an option, however at this time no decision has been made.

In a Thursday statement on Twitter, Rep. Greene said Nancy Pelosi (D-CA) “knows walls work” and recommended the House Speaker “finish the wall at the border”.

“Speaker Pelosi built a wall around the Capitol bc she’s afraid of truckers. The same truckers who deliver her favorite Dove Bars to stores her staff shops at,” the Georgia congresswoman said, referring to Pelosi’s apparent love for ice cream.

“Pelosi knows walls work and keep US taxpayers out of the People’s House. She should finish the wall at the border,” she urged.

.@SpeakerPelosi built a wall around the Capitol bc she’s afraid of truckers.

The same truckers who deliver her favorite Dove Bars to stores her staff shops at.

Pelosi knows walls work and keep US taxpayers out of the People’s House.

She should finish the wall at the border.

Nancy Pelosi showing off her ice cream collection during an appearance on “The Late, Late Show With James Corden” in 2020:

After today, Small Business workers and employees aren’t going to get a paycheck to feed their families because of the Democrats.

But here’s a video Nancy Pelosi’s team put out of her showcasing a (very fancy) freezer full of ice cream and a house full of chocolate. pic.twitter.com/265mKC7q9v

(Related: James Woods: ‘If a Nation of Truckers Were to Strike for Just Two Weeks, It Would Be a Stunning Catastrophe’)