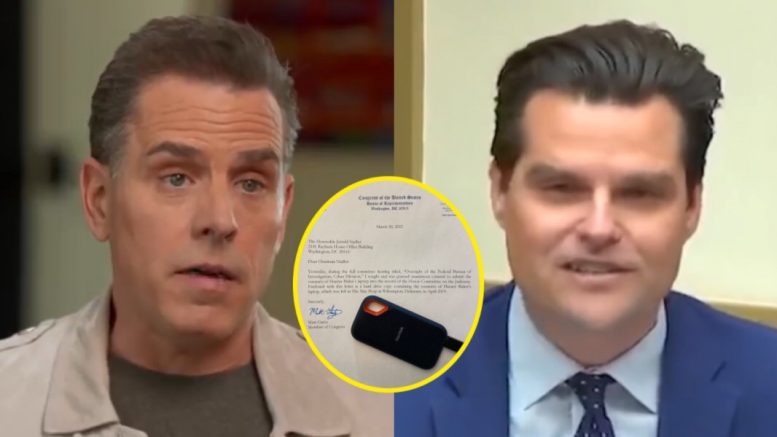 Rep. Matt Gaetz held up an apparent storage drive containing content from Hunter Biden’s laptop and entered it into the Congressional Record on Tuesday, as previously reported by The Freedom Times.

The Florida GOP congressman succeeded with his initiative during a hearing on oversight of the FBI’s Cyber Division “after its assistant director, Bryan Vorndran, testified that he didn’t “have any information about the Hunter Biden laptop,” which the bureau seized from a Delaware repair shop in December 2019,” the New York Post reported.

Rep. Gaetz on Wednesday, tweeted a screenshot of a letter he wrote to House Judiciary Committee Chairman Jerrold Nadler (D-NY), including a picture of the hard drive copy “containing the contents of Hunter Biden’s laptop” — sharing with followers on Twitter that he officially submitted it into the Congressional Record.

The letter to Nadler from Gaetz reads as follows:

“Yesterday, during the full committee hearing titled, “Oversight of the Federal Bureau of Investigation, Cyber Division, I sought and was granted unanimous consent to submit the contents of Hunter Biden’s laptop into the record of the House Committee on the Judiciary.

Enclosed with this letter, is a hard drive copy containing the contents of Hunter Biden’s laptop, which was left in the Mac Shop in Wilmington, Delaware, in April 2019″. Continued Below

Rep. Gaetz spoke with Newsmax’s Grant Stinchfield on Tuesday after he successfully entered the  contents of the hard drive — pertaining to Hunter Biden’s laptop — into the Congressional Record, explaining what will likely occur.

“So the way these hearings work — after they’re concluded — about a week occurs for materials to be gathered and bound together, and the committee issues a report based on that particular event or hearing or markup,” the Florida congressman explained.

“Now we are gonna take the Hunter Biden laptop, the most suppressed information in the world, the information 51 intelligence officials said was ‘Russian disinformation’ — after, of course, the New York Times said, ‘That was baloney’, and we are gonna put it in that record for everyone to see, to make your own judgements,” he clarified.

(Related Article: Schweizer on Why NYT Is Reporting on Hunter’s Laptop: They’re ‘Extremely Concerned’ He Will Be ‘Indicted’)