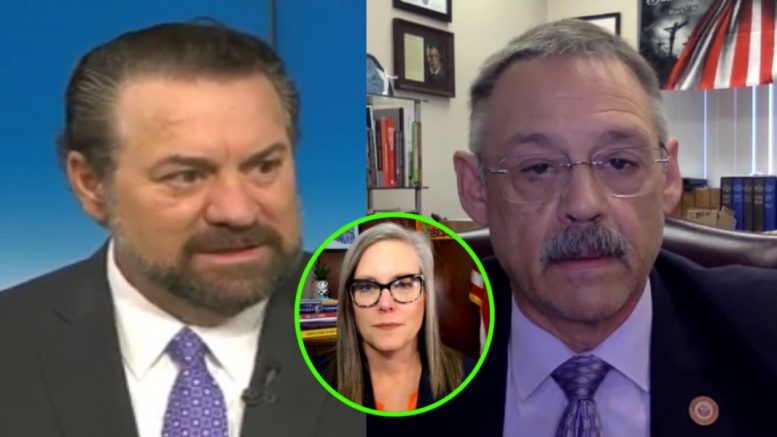 Arizona Attorney General Mark Brnovich (R) on Tuesday “referred a matter to the Cochise County Attorney to investigate and take any appropriate actions (civil and criminal) regarding the Arizona Secretary of State taking down the online E-Qual system.”

The move came after Secretary of State Katie Hobbs ignored prior warnings from Attorney General Mark Brnovich that it would be illegal for her to shut down part of the E-Qual system where candidates can gather signatures online for their nominating petitions.

Brnovich sent Cochise County Attorney Brian McIntyre a letter, asking him to to see if any laws were broken. He told McIntyre that he gets to operate “independently of the attorney general’s office in determining what actions are appropriate to resolve this matter.”

Yesterday, our office referred a matter to the Cochise County Attorney to investigate and take any appropriate actions (civil and criminal) regarding the Arizona Secretary of State taking down the online E-Qual system. pic.twitter.com/izJsLPYbMf

During an interview on Steve Bannon’s “War Room” Thursday, Arizona State Rep. Mark Finchem, who is running for Secretary of State in Arizona, weighed in over the matter, suggesting that Hobbs “committed a crime”.

“Basically [Brnovich] is calling [Hobbs] out for is a memo from January 16 … where he explicitly told her, ‘If you take the online petition gathering tool that is required by law’ — mandated by law — ‘If you take that down before the end of the collection period, you are committing a class 6 felony or class 3 misdemeanor’, depending upon the facts and circumstances,” Finchem explained.

“She did it anyhow. And the reality of that is it doesn’t affect state-wide offices like the one she’s running for, but it does affect legislative offices. That means that rural legislators, and even some of the folks in suburban Arizona, are unable to collect signatures online. And this is leading up to — we’re just days away from the close of the nomination petition collection period,” he said. Video Below

“So what she’s done is she’s interfered with the political process of candidates getting on the ballot. That is serious,” Mr. Finchem noted. “And this woman has been lawless all throughout this last year”.

Asked if Hobbs is actually going to be “charged and gone after on criminal charges” or if it is “more of a hopium”, the Arizona State rep. replied, “I don’t think this is hopium, Steve. The referral of this to a county prosecutor is a pretty serious matter.”

“… I think this is very serious. You’ve got evidence, clear-cut evidence. You’ve got a warning. In fact, I think she got two warnings. … She knowingly did this. I don’t see how this doesn’t end up in some kind of conviction. … At the end of the day, she committed a crime”, Rep. Finchem said.

(Related: Wendy Rogers to AZ’s Secretary of State: ‘You Will Not Be Governor – You Are Going to the SLAMMER’)