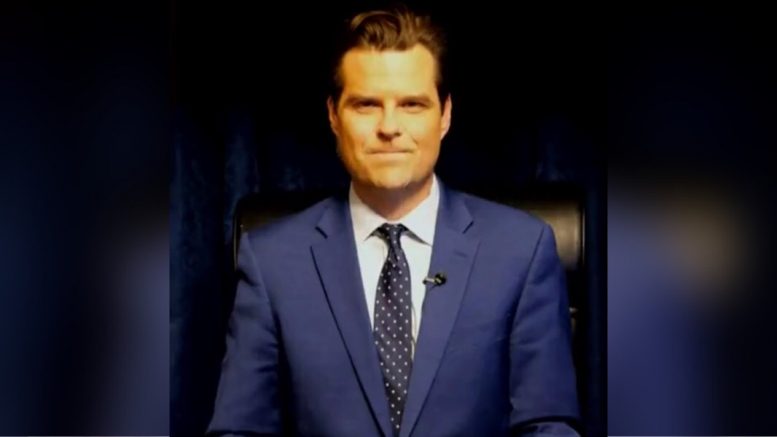 Rep. Matt Gaetz held up an apparent storage drive containing content from Hunter Biden’s laptop and entered it into the Congressional Record on Tuesday, as previously reported by The Freedom Times.

The Florida GOP congressman succeeded with his initiative during a hearing on oversight of the FBI’s Cyber Division “after its assistant director, Bryan Vorndran, testified that he didn’t “have any information about the Hunter Biden laptop,” which the bureau seized from a Delaware repair shop in December 2019,” the New York Post reported.

Rep. Gaetz spoke with Newsmax’s Grant Stinchfield on Tuesday after he successfully entered the  contents of the hard drive — pertaining to Hunter Biden’s laptop — into the Congressional Record, explaining what will likely occur.

“So the way these hearings work — after they’re concluded — about a week occurs for materials to be gathered and bound together, and the committee issues a report based on that particular event or hearing or markup,” the Florida congressman explained.

“Now we are gonna take the Hunter Biden laptop, the most suppressed information in the world, the information 51 intelligence officials said was ‘Russian disinformation’ — after, of course, the New York Times said, ‘That was baloney’, and we are gonna put it in that record for everyone to see, to make your own judgements,” he clarified.

Rep. Gatez said he does not “have some personal curiosity in Hunter Biden’s activities”, but asserted that Joe Biden’s son “could be a point of vulnerability for our country”, because of “the deals, the schemes, the kickbacks.” Continued Below

“You don’t think the Chinese and the Russians and who knows who else could use that to compromise the First Family and to get them to act in their interest, instead of the American interest?” the Florida lawmaker asked.

“So I’m here for turning all the cards on the table face up, and that’s what we’re gonna do,” he added.

Gaetz also suggested the FBI is “willfully complicate in the efforts to try to whitewash the nefarious activities of the Biden crime family”. Video Below

"We are going to take the #HunterBidenLaptop, the most suppressed information in the world, and put it in the official record for everyone to see and make your own judgments.” pic.twitter.com/HxQ920nZDk

(Related Article: Schweizer on Why NYT Is Reporting on Hunter’s Laptop: They’re ‘Extremely Concerned’ He Will Be ‘Indicted’)

Sen. Paul Rips Cheney for her Role on the Jan. 6 Cmte: ‘I Think it’s Time we Send Liz Cheney Back to her Home in Virginia’