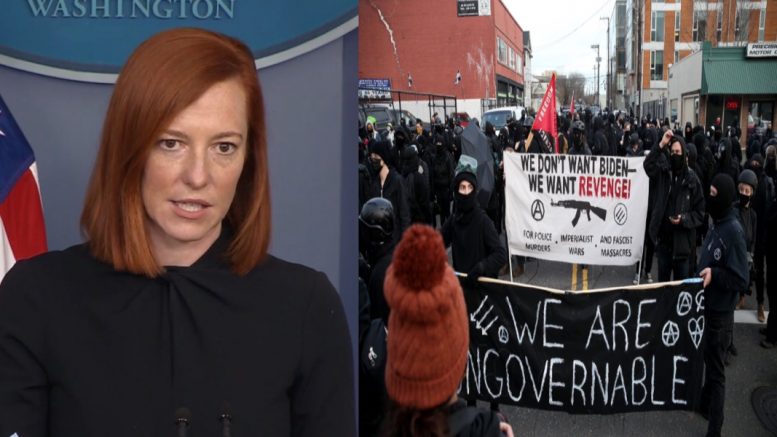 During a White House press briefing Friday, press secretary Jen Psaki failed to publicly condemn the ongoing far-left violence from Antifa following the acts of vandalism and destruction that took place on Inauguration Day in Seattle, Washington and Portland, Oregon.

Antifa vandalized a Democratic Party office and other buildings and scuffled with police on Wednesday, protesting against Joe Biden’s inauguration.

People dressed in black and with their faces covered broke windows and the glass door at the Democratic Party of Oregon business office in Portland, spray-painting an anarchist symbol over the party sign, video posted on social media showed, Reuters reported. 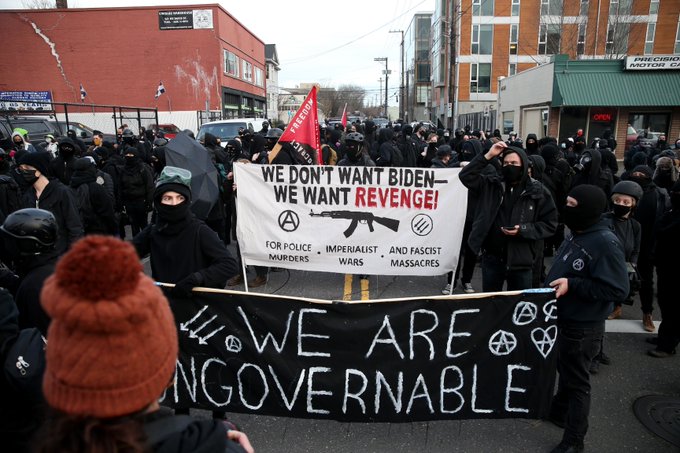 Asked on Friday if Joe Biden has any comment on the ongoing violence in Oregon and Washington that has been seen in the recent days, press secretary Jen Psaki, replied, “Certainly, we had our team on the ground, our national security even before 12:01 early in the morning on Inauguration Day, because we wanted to be able to monitor events happening across the country and any unrest that was resulting from the last couple of weeks.”

“I haven’t spoken with [Biden] specifically about those events [in Portland and Washington], but it is something our national security team … is closely monitoring, of course. If we have an additional update, I’m happy to provide it to you,” Psaki claimed. Video Below

WATCH: Biden press sec fails to condemn Antifa domestic terrorism in Oregon and Washington, says they are monitoring it. pic.twitter.com/xTb40f6PXM

Journalist Any Ngo on Wednesday, posted video footage Antifa’s destruction they engaged in on Wednesday:

Portland: Watch shocking footage of #antifa smashing up the Democratic Party of Oregon headquarters. They bring weapons while their comrades use umbrellas to block surveillance video. Video by @Julio_Rosas11. #PortlandRiots pic.twitter.com/KdNNRgIEV0

Portland: A mob of #antifa chanted "F— Joe Biden" as they marched to the Portland @ICEgov building to riot. pic.twitter.com/5oqbp7ECqQ

Seattle: #Antifa trash the streets as they march around and smash up businesses and buildings. pic.twitter.com/dx02fBxzN8

Seattle: In case it’s not clear who is involved in the riot, the black-clad mob shouts, “Antifa, antifa!” pic.twitter.com/pncWROX4mF

Portland: Antifa came to riot at the local @ICEgov facility in coordinated attacks across the country. Federal police were prepared to protect the government property. Video by @Julio_Rosas11: pic.twitter.com/FQEslRahwN

Seattle: #Antifa have shut down traffic on a road and are setting US flags on fire. pic.twitter.com/IObO1mcbXZ