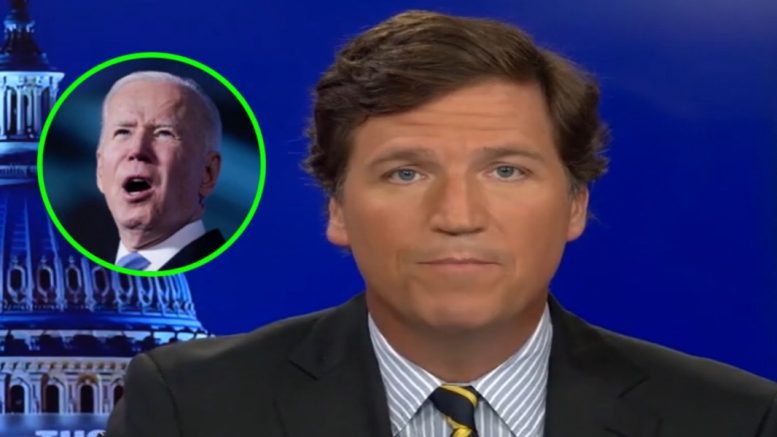 Photos surfaced on social media have revealed that 79-year-old Joe Biden used detailed notecards apparently from his staff on Monday — during a news conference at the White House — to be able to provide answers to a series of questions over his statement regarding Vladimir Putin.

During the brief questions and answer session with reporters, Biden appeared to read from a notecard, seemingly prepared by his staff, over whom to call on for a question.

A notecard was captured by a camera, showing Biden’s “Tough Putin Q&A” notes with detailed questions that Biden would receive from reporters along with detailed bullet points of how he should answer them.

Meanwhile, Fox News host Tucker Carlson reacted to remarks Biden had made overseas in Europe, which ultimately prompted his administration to walk back three of his statements: telling troops they are going to Ukraine, the U.S. would use a chemical weapon, and calling for regime change in Russia.

“All right. Joke’s over, too much is at stake. If there was ever a time, if there was, in U.S. history, ever a time, to invoke the 25th Amendment, it is now. As Joe Biden himself put it, ‘For God’s sakes, this man cannot remain in power,’ for all of our sakes”, Carlson said. Video Below

“Invoke the 25th Amendment. As Joe Biden himself put it, For God’s sake, this man cannot remain in power.”

(Related: Doocy Grills Biden Over ‘Big Things’ he Said ‘On the World Stage’ That ‘Keep Getting Walked Back’ by his Admin)

Sen. Kennedy to TX Democrats: ‘Either You’re So Dumb You Lose Your Place During Sex or You Want to Cheat’