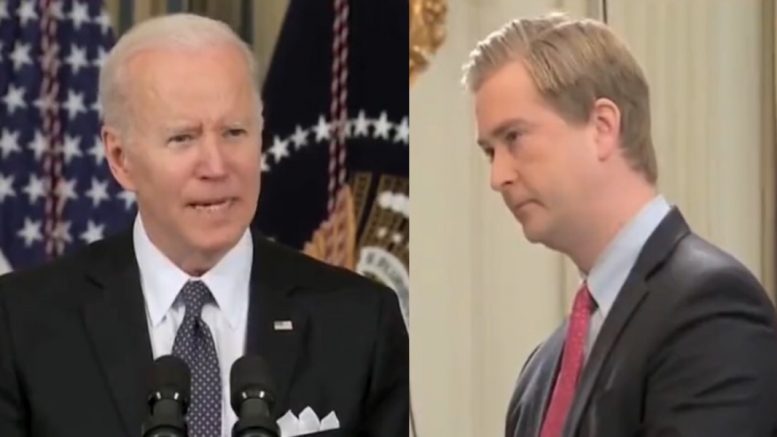 Fox News White House correspondent Peter Doocy grilled 79-year-old Joe Biden over remarks he had made overseas in Europe that ultimately prompted his administration to walk back three of his statements: telling troops they are going to Ukraine, the U.S. would use a chemical weapon, and calling for regime change in Russia.

Biden on Monday alleged, “None of the three occurred”.

“Are you worried other leaders in the world are going to start to doubt that America is back if some of these big things that you say on the world stage keep getting walked back?” Doocy asked Biden.

Biden falsely claimed that “none of the three occurred”, then told Doocy, “You interpret the language that way. I was talking to the troops — we were talking about helping train the troops in that — the Ukrainian troops that are in Poland. That’s with the context. I sat there with those guys for a couple hours. That’s what we talked about”. Continued Below

Doocy followed up by asking Biden, “So when you said, ‘You’re going to see when you’re there’ you were not intending…”

“I was referring with — meeting with and talking with the Ukrainian troops in Poland”, Biden claimed.

“And when you said a chemical weapon use by Russia would trigger a response in kind,” Doocy explained to the Democrat career politician, which prompted Biden to respond, “It will trigger a significant response”. Continued Below

Full exchange between Doocy and Biden:

On Thursday, Biden was asked if the U.S. would respond if Russia were to use chemical weapons as part of its invasion of Ukraine. Biden said that such a move by the Russians would “trigger a response in kind.” After that remark, National Security Adviser Jake Sullivan said, “The United States has no intention of using chemical weapons, period, under any circumstances”.

Asked by @CeciliaVega if the use of chemical weapons in Ukraine would trigger a military response from NATO, Pres. Biden says: "It would trigger a response in kind."https://t.co/XFaQ3wJP6k pic.twitter.com/QjE2wSD3oO

On Friday, Biden was speaking to U.S. troops in Poland and appeared to suggest that the troops would soon be in Ukraine itself — something U.S. officials have repeatedly ruled out.

Joe Biden announces to the World~
and the U.S. 82nd Airborne they will be going to Ukraine

"You’re going to see when you’re there …."pic.twitter.com/ihSZKT3ejc

A White House spokesperson later clarified that remark: “The President has been clear we are not sending U.S. troops to Ukraine and there is no change in that position.” Continued Below

Biden also turned heads on Saturday when, at the end of a speech in Warsaw, Poland, he said, “for God’s sake, this man cannot remain in power.”

The White House quickly tried to walk back the comment, claiming that Biden was referring to Putin exercising power outside of Russia, and Secretary of State Antony Blinken affirmed that the U.S. has no plans for regime change in Moscow, The Hill reported.

"For God's sake, this man cannot remain in power."

Joe Biden is not fit to be President of the United States. Biden's mental crisis should no longer be America's crisis. The United States needs strong and capable leadership to deal with multiple crises of the Biden administration's creation. Time to end it. #Biden25 #RemoveBiden

(Related: Fmr. White House Physician On Biden: “He’s Either Gonna Resign…Or They’re Going To Have To Use The 25th Amendment”)