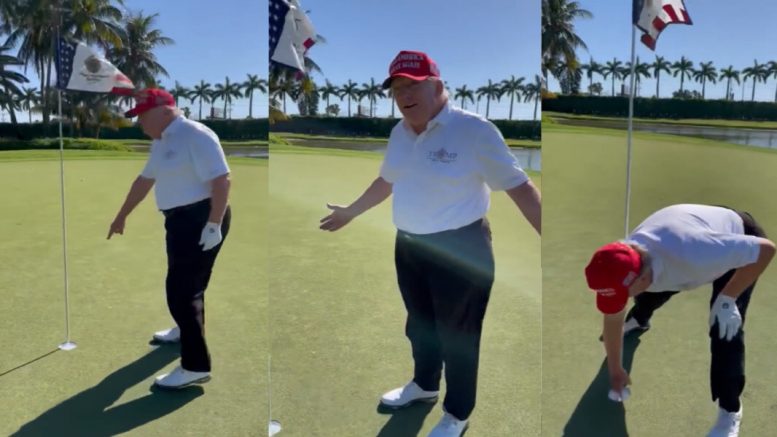 The 45th President issued an email statement Monday from the Office of Donald J. Trump confirming it is “100% true” he hit a hole-in-one while playing at his Trump International Golf Course in West Palm Beach over the weekend.

“Many people are asking, so I’ll give it to you now, it is 100% true,” Trump wrote in the statement.

“While playing with the legendary golfer, Ernie Els, winner of four Majors and approximately 72 other tournaments throughout the world, Gene Sauers, winner of the Senior U.S. Open, Ken Duke, and Mike Goodes, both excellent tour players, I made a hole-in-one,” President Trump said.

“It took place at Trump International Golf Club in West Palm Beach, Florida, on the 7th hole, which was playing 181-yards into a slight wind. I hit a 5-iron, which sailed magnificently into a rather strong wind, with approximately 5 feet of cut, whereupon it bounced twice and then went clank, into the hole,” he explained.

“These great tour players noticed it before I did because their eyes are slightly better, but on that one hole only, their swings weren’t. Anyway, there’s a lot of chatter about it, quite exciting, and people everywhere seem to be asking for the facts,” said the 45th President.

“Playing with that group of wonderful, talented players was a lot of fun. The match was Ernie and me (with no strokes) against Gene, Mike, and Ken. I won’t tell you who won because I am a very modest individual, and you will then say I was bragging—and I don’t like people who brag!” he added in his statement. Continued Below

Trump’s statement also included a video of him walking to the hole, where he explained in the statement that his hit took place “on the 7th hole, which was playing 181-yards into a slight wind.”

45 picking up his hole-in-one on Saturday. pic.twitter.com/dzTdWAdkWe

Trump’s statement was issued after Tim Swain, a Republican running in South Carolina for the U.S. Senate, tweeted a photo of the 45th President and the pro golfers celebrating on the green, captioning it “Trump just made a hole-in-one!”

🚨TRUMP JUST MADE A HOLE-IN-ONE! pic.twitter.com/89lrgsGkjT

Perhaps his greatest statement ever. pic.twitter.com/8bdw1Rvv9P