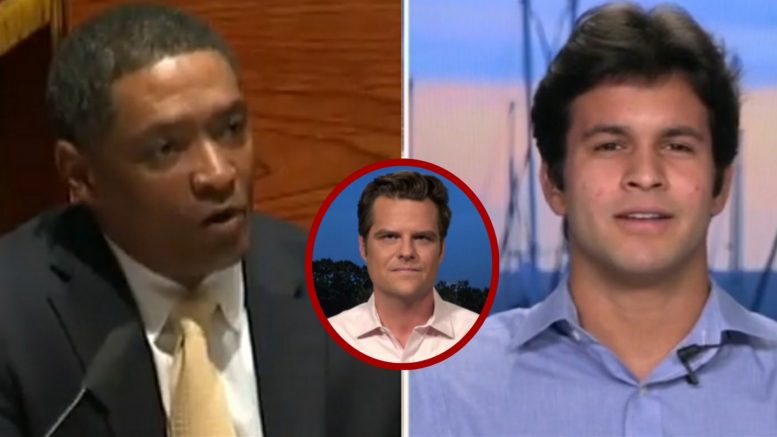 Congressman Matt Gaetz introduced his son Nestor to Tucker Carlson on Thursday, while discussing a heated interaction he had with Rep. Cedric Richmond (D-LA) during a congressional committee hearing.

In reaction to Republicans trying to make amendments to Democrats’ police reform bill, Rep. Richmond said, “I am absolutely sitting here offended. To my colleagues, especially the ones that keep introducing amendments that are a tangent and a distraction from what we’re talking about, you all are white males, you never lived in my shoes and you do not know what it’s like to be an African American male.”

Gaetz angrily fired back, “Are you suggesting that you’re certain that none of us have nonwhite children?”

I’m not about to get sidetracked by the color of our children,” Richmond replied. “I already know that there are people on the other side that have black grandchildren. It is not about the color of your kids. It is about black males, black people in the streets that are getting killed. Amd if one of them happens to be your kid, I’m concerned about him too, and clearly I’m more concerned about him than you are.”

Gaetz responded, “You’re claiming you’re more concerned for my family than I do. Who in the hell do you think you are? That is outrageous. You should take those words down. I know you care about your family and love your family, so do we dammit!”

Gaetz later revealed on Twitter that he has a 19-year-old Cuban-American son named Nestor, who he has been raising for the last six years. See Below

Nestor turned 19 a few days ago & will be off to University. He arrived here at 12.

As you can imagine, I was triggered when (to make an absurd debate point) a fellow congressman diminished the contributions of Republicans because we don’t raise non-white kids.

While making a brief appearance on Tucker’s Thursday night program, Nestor addressed the remarks made by Rep. Richmond.

“I think it’s kind of unfair…to tell someone that they don’t understand because of their racial color,” Nestor said in regards to Rep. Richmond’s remarks.

“He’s fighting for equality, but if you tell someone to not get involved — that he doesn’t understand because of his color — you’re kind of being a hypocrite there,” he added. Video Below

Rep. Gaetz On ‘Wild Conspiracies Theories’ Against Him: “They Aren’t Really Coming For Me, They’re Coming For You. I’m Just In The Way”