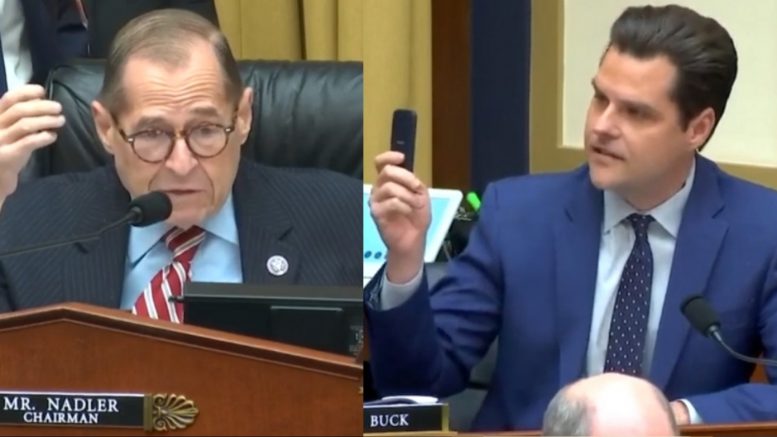 Rep. Matt Gaetz held up an apparent storage drive containing content from Hunter Biden’s alleged laptop and entered it into the Congressional Record on Tuesday.

The Florida GOP congressman succeeded with his initiative during a hearing on oversight of the FBI’s Cyber Division “after its assistant director, Bryan Vorndran, testified that he didn’t ‘have any information about the Hunter Biden laptop,’ which the bureau seized from a Delaware repair shop in December 2019,” the New York Post reported.

Related Article: Schweizer on Why NYT Is Reporting on Hunter’s Laptop: They’re ‘Extremely Concerned’ He Will Be ‘Indicted’

“I seek unanimous consent to enter into the record of this committee, content from, files from and copies from the Hunter Biden laptop,” Rep. Gaetz said after initialy being denied by Democrat Chairman Jerry Nadler.

Nadler agreed to Gaetz request “without objection” after the Floida Congressman cited “consultation with majority staff.”

Moments ago, I successfully entered the hard drive of Hunter Biden’s laptop into the Congressional Record.

It’s unclear if the material entered into the record includes the many sexually explicit photos and videos stored on the laptop and a Gaetz spokesperson didn’t respond to an email inquiry.

The lurid images include a raunchy, 12-minute clip video that appears to show President Biden’s son smoking crack while engaged in a sex act with an unidentified woman.

Here’s the full clip of Rep. Gaetz from Tuesday’s hearing: