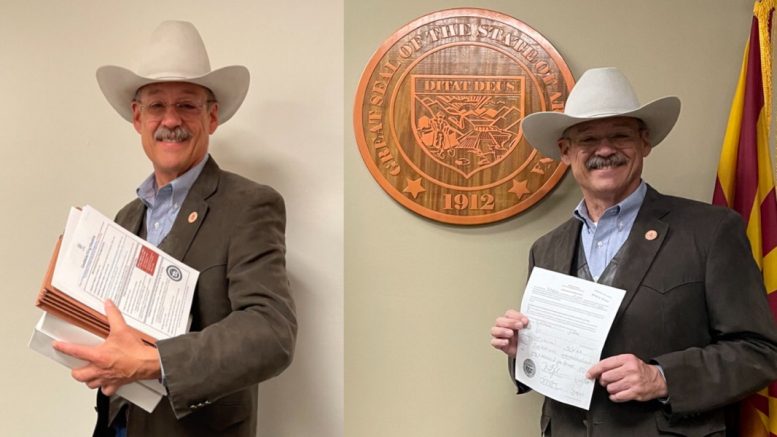 State Representative Mark Finchem (R-AZ) announced on Monday that he has garnered 11,318 signatures to “get on the ballot” for Arizona Secretary of State and noted that it is 4,000 over the requirement.

“Just turned in 11,318 signatures, which is 4k over the requirement,” Finchem said in a post on Twitter.

“Thank you to all of my supporters and signers for helping this #ElectionIntegrity candidate get on the ballot for Arizona Secretary of State. #TeamFinchem #MAGA” Rep. Finchem expressed.

Just turned in 11,318 signatures, which is 4k over the requirement. Thank you to all of my supporters and signers for helping this #ElectionIntegrity candidate get on the ballot for Arizona Secretary of State. #TeamFinchem #MAGA pic.twitter.com/zI32fRtOQt

Rep. Finchem received a “complete and total” endorsement from 45th President Donald J. Trump last year, in September, and called the Arizona lawmaker a “true warrior” that “has fought for our Country right from his earliest moments in government”, adding, “He will never let the people of Arizona down!”, as previously reported by The Freedom Times.

In January, the 45th President issued a $5,000 check from his “Save America” PAC in support of Finchem’s 2022 campaign. “I am pleased to send the enclosed check in support of your campaign. Our nation is strong because of courageous patriots like you who believe in — and defend — the great American ideals of faith, family, community, and country first,” Trump wrote.

“I will never stop fighting for the America you and I cherish, and I am pleased to lend my support and encouragement for your efforts to protect and preserve the American dream for the citizens of Arizona,” he said. Continued Below

The Arizona Secretary of State candidate released a campaign video earlier in the year over election integrity, securing the U.S./Mexico border, and standing up for freedoms against medical mandates, as previously reported by this publication.

In February, Rep. Finchem introduced a resolution to “set aside and decertify three 2020 county elections” in Arizona.

The concurrent resolution, HCR 2033, calls for the elections of Maricopa, Pima and Yuma Counties to be set aside “based on clear and convincing evidence that the elections in those counties were irredeemably compromised”.

The 9-page bill states in part: “Whereas, a declaration of the results of statewide electoral contests in the 2020 general election is in dispute with probable cause to believe that multiple discrepancies exist, both criminal and noncriminal in nature, and that so many questionable ballots were commingled with legitimate ballots across the State of Arizona that significant voter disenfranchisement has occurred, making the election irredeemably compromised”.

AG Brnovich on DOJ Suing AZ Over ‘Proof of Citizenship’ for Presidential Elections: I will ‘Preserve Arizona’s Election Integrity Measures’